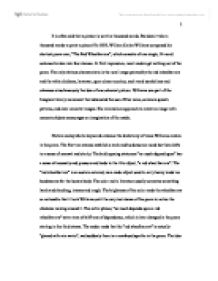 An Essay on &quot;The Red Wheelbarrow&quot; by William Carlos Williams.

It is often said that a picture is worth a thousand words. But does it take a thousand words to paint a picture? In 1923, William Carlos Williams composed his shortest poem ever, "The Red Wheelbarrow", which consists of one single, 16-word sentence broken into four stanzas. At first impression, most readers get nothing out of the poem. The only obvious characteristic is the rural image painted by the red wheelbarrow and the white chickens, however; upon closer scrutiny, each word symbolizes and enhances simultaneously the idea of one coherent picture. Williams was part of the Imagism literary movement that advocated the use of free verse, common speech patterns, and clear concrete images. His minimalism approach to create an image with concrete objects encourages on imagination of the reader. Diction and symbolic keywords enhance the dichotomy of tones Williams creates in the poem. The first two stanzas establish a stark and burdensome mood but then shifts to a sense of renewal and clarity. The bold opening statement "so much depend upon" has a sense of necessity and pressure and leads to the title object, "a red wheel barrow". The "red wheelbarrow" is an austere-colored, man-made object used to carry heavy loads too burdensome for the human body. ...read more.

Though William tries to create an image with the last amount of words possible, he still achieves to specify elements of the image as if to break it down to its most basic parts. The breaking of the words "wheel" and "barrow", as well as "rain" and "water" calls for more attention at each component of the picture that's being painted. The second stanza could easily been "a red wheel" and still made grammatical sense. Only after skipping to the next line, does the reader complete the phrase, "a red wheel barrow". The splitting of the word wheelbarrow with not only a space, but also a line is a way for Williams to convey to the reader that the wheelbarrow is in fact two separate parts. The splitting of the word is even more significant due to the fact that the title has the words together. Its almost as if one is scrolling through the image, first seeing a wheel, and then the entire wheelbarrow. The "rain water" works in a similar fashion. The stanza easily makes sense if it read simply "glazed with rain", however; when talking about rain, one usually thinks of the rain as the rain that is falling down from the sky. ...read more.

After seeing this crucial and intense event, the viewer throughout notices the other people "beside" Williams - the nurses and doctors in white hospital uniforms. The presence of people adds to the sense of earthliness, thus completing the whole analogy of the poem. The contrast of the poem is seen in this application of the image; the beginning is serious and vital, and after the newborns are received as human beings, the tension is off, and everything returns to ordinary. William's medical career surely gave him a new insight into the lives of the common people. He chose the imagism poetic approach in his work as a rejection of Formalism and Victorian sentimentalism. As seen in "The Red Wheelbarrow", Williams took themes and objects from every day life; used free verse, common speech patterns, and clear concrete images. His use of only the essential words opens the poem up for interpretation and personal application. But despite the simplicity of the 16-word poem, William's skills in symbolic diction and subtle rhythmic patterns easily convey his own voice for the tone and atmosphere for the poem. Williams prove that though a picture may be worth a thousand words, it only takes 16 to create a concrete image. An Essay on "The Red Wheelbarrow" by William Carlos Williams Alice Zhou 2-24-04 21L.004 1 ...read more.