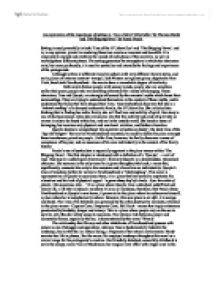 An exploration of the importance of setting in 'Tess of the D'Urbervilles' by Thomas Hardy and 'The Shipping News' by Annie Proulx Setting is used powerfully in both 'Tess of the D'Urbervilles' and 'The Shipping News', and is, in my opinion, pivotal in rendering these two novels so resonant and beautiful. It is employed to expand and reinforce the moods of each phase of the narrative, as well as marking these different phases. The setting generates the atmosphere in which the characters exist, but more profoundly, it is used to symbolise and intensify the feelings and experiences of the protagonists. Although written at different times by authors with very different literary styles, and set in places of extreme contrast- tranquil, lush Wessex set against grimy, degenerate New York, then bleak Newfoundland - the novels share a remarkable degree of similarity. Both novels feature people with uneasy minds, people who are somehow unlike their peers, people who are searching ultimately for a sense of belonging. These characters, Tess and Quoyle, are strongly influenced by the ancestral myths which haunt their surroundings. They are trying to understand themselves in the context of these myths, and to understand the forces that have shaped their lives. Tess Durbeyfield discovers that she is a 'belated seedling' of a decayed aristocratic family, the D'Urbervilles. ...read more.

The countryside in Newfoundland is grim and rough in comparison to the pastoral beauty of Wessex. The description of landscape is less significant than in 'Tess of the D'Urbervilles'; Proulx concentrates more on the sea's power as the force that shapes the lives of the habitants, and the importance of dwelling in representing Quoyle's life and battles. Her narrative is strongly metaphorical and shares some of Hardy's lyricism, his rich language, and this combined with fragments of local dialect injected into her prose fully submerses the reader into the world of the Newfoundlanders. Quoyle's life in 'Bedraggled Mockingburg' is one reflected by his squalid house, with its 'grey sheets' and 'cribs jammed close like bird cages'. It is indeed a caged, oppressed existence, superficial and unsatisfying. He feels out of place with his surroundings, alienated, isolated and uncomfortable. He has a sense that the triviality that surrounds him is 'the stuff of others' lives.' He is 'waiting for his to begin', longing for a more resolute, gratifying life. After the death of his parents and his cruel, carnal wife, he returns with an old aunt to the land of his fathers, Newfoundland, to 'start a new life in a fresh place', a place of rugged, perilous beauty: 'Miles of coast blind wrapped in fog. Sunkers under wrinkled water, boats threading tickles between ice-scabbed cliffs... ...read more.

Knots are of literal importance in the novel; fishermen, sailors and upholsterers use knots as part of their livelihoods. However, in this novel, they are more a metaphor for the versatility of human beings, specifically a metaphor for the lives of the Quoyles, who must undo the binds of the past in order to have a future. Knots tie Quoyle to his ancestors; the gruesome knotted hair brooch and the knots of Nolan's sorcery. As the last chapter definition says, 'there will always be new knots to discover'. Quoyle must release himself from the old knots and tie new ones. Both authors use setting as an essential component to their stories, instead of merely using it as a backdrop. In essence, Hardy uses the landscape in 'Tess of the D'Urbervilles' not only to magnify her experiences but literally to be her experiences in an alternative form. In Hardy's own words, "My art is to intensify the expression of things as is done by Crivelli, Bellini, etc., so that the heart and inner meaning is made visibly visible."(An extract from one of Hardy's notebooks). Proulx uses the setting in her novel to mark each stage of her protagonist's life, and like Hardy, to symbolise his struggles and the influences upon him. In my opinion, the power in both novels is derived, to a large extent, from the atmosphere created by the surroundings, whether the raw coast and fierce elements of Newfoundland or the idyllic warmth and beauty of Hardy's Wessex. ...read more.