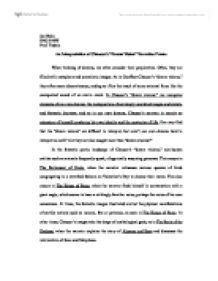 Often, in Chaucer's "dream vision" landscape, the narrator's dreams are inspired by literature he has read and often describes therein, hence giving the audience the key to solve the riddles he proposes in his supposed "dream" within the dream-narrative frame. In The Book of the Duchess, the narrator explains that he fell asleep while reading the tale of Alcyone and Seys, in which Seys, the loved one, dies. Similarly, in his dream thereafter, he meets a knight who mourns the death of his wife. Herein, Chaucer implies a direct causal relation between the book he had read and the subsequent dream. Furthermore, the dream of having met the knight gives the narrator absolution in that he realizes the need to stop obsessing about love. In The House of Fame, the narrator recollects having fallen asleep in a shrine while on a pilgrimage and having dreamed that he woke up in a glass palace where he read a variation on Virgil's tale of Aenius. ...read more.

Chaucer emphasizes the power of the images within the dream to effect change. Thus, not only does Chaucer see dreams as being a reflection of life, but also he sees dreams as being a fantastic opportunity to work out the dilemmas of life. If only we could remember all of our dreams, we might find this to be true. But then again, if we can't recall them, how are we to perceive the words of the man of great authority? In summary, Chaucer depicts his "dream visions" as being full of perplexities: metaphoric personas, mythological figures and talking birds. As in our own dreams, Chaucer's "dream visions" tend to end abruptly, but oddly, the cause is typically some force within the dream itself, thus he implies the power of dreams to awaken us and transform us. Moreover, Chaucer intentionally juxtaposes seemingly unrelated images and events as a means of making the "dream vision" more similar to an actual dream. As in our own dreams, Chaucer's narrator is merely an extension of himself pondering his own identity and the mysteries of life with all of its own prevalent discontinuities. ?? ?? ?? ?? 2 ...read more.