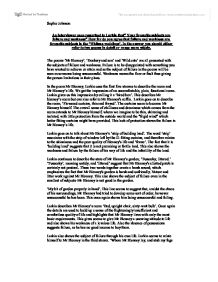 An interviewer once remarked to Larkin that" Your favourite subjects are failure and weakness" How far do you agree that failure and weakness are favourite subjects in the 'Whitsun weddings'. In the answer you should either refer to two poems in detail or range more widely. The poems 'Mr Bleaney', 'Dockery and son' and 'Wild oats' are all presented with the subjects of failure and weakness. Failure is to be disappointed with something you have wanted to achieve or attain and so the subject of failure in the poems will be seen as someone being unsuccessful. Weakness means the flaw or fault thus giving the person limitations in their plans. In the poem Mr Bleaney, Larkin uses the first five stanzas to describe the room and Mr Bleaney's life. We get the impression of an uncomfortable, plain, functional room. Larkin gives us this impression by calling it a 'hired box'. This describes Mr bleaney's room but can also refer to Mr Bleaney's coffin. ...read more.

Larkin continues to describe the state of Mr Bleaney's garden; 'Tussocky, littered.' 'Tussocky', meaning untidy, and 'littered' suggest that Mr Bleaney's allotted patch is certainly not pastoral. These two words together create a harsh sound; which emphasizes the fact that Mr Bleaney's garden is harsh and unfriendly. Nature and litter work against Mr Bleaney. This also shows the subject of failure even in the smallest of subjects-Mr Bleaney is not good in the garden. 'My bit of garden properly in hand'. This line seems to suggest that, amidst the chaos of his surroundings, Mr Bleaney had tried to develop some sort of order, however unsuccessful he has been. This once again shows him being unsuccessful and failing. Larkin describes Mr Bleaney's room 'Bed, upright chair, sixty-watt bulb'. Once again the details are used to build up a sense of the frighteningly insufficient and comfortless quality of life and highlights that Mr Bleaney lives with only the most basic requirements. ...read more.

unfulfilling quality of Mr Bleaney's life. The colloquial word, 'plugging' used in the fifth stanza, suggests Mr Bleaney battling against the odds, striving for fortune. Mr Bleaney, in the poet's mind, fights on at the football pools just as he had with the garden. Larkin seems to be condescending towards these goals. Because of Larkin's attitude it shows Mr Bleaney to be a failure. Larkin begins the sixth stanza with a 'but'. There is a clear change of mood at this point. The word marks the limits of the poet's assured knowledge, and Larkin becomes more introspective and reflective. On the last line Larkin writes 'I don't know'. Larkin refuses, to declare his own views about the value of Mr Bleaney's life. This may be because of the similarities to his own but he seems to have already deemed Mr Bleaney's life a failure. Larkin is saying that each of us, when it comes down to it, leaves little behind when we die to show for our lives? And in that sense we are failures. Sophie Johnson ...read more.