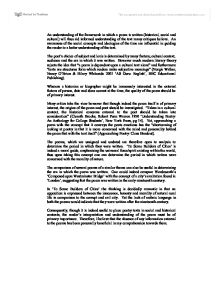 An understanding of the framework in which a poem is written (historical, social and cultural) will thus aid informed understanding of the text many critiques believe. An awareness of the social concepts and ideologies of the time are influential in guiding the reader to a better understanding of the text. The poet's choice of subject and lexis is determined by many factors; cultural context, audience and the era in which it was written. However much modern literary theory rejects the idea that "a poem is dependant upon a cultural text alone" and furthermore "texts are structures form which readers make subjective meanings" (Norgis Walker, Nancy O'Brien & Hilary Whiteside 2001 'AS Guru: English', BBC Educational Publishing). ...read more.

"Taken in a cultural context, the historical concerns external to the poet should be taken into consideration" (Cleanth Brooks, Robert Penn Warren 1950 'Understanding Poetry: An Anthology for College Students', New York Press, pg 14). Yet, approaching a poem with the concept that it conveys the poets emotions has the "shortcoming of looking at poetry in that it is more concerned with the mind and personality behind the poem that with the text itself" (Approaching Poetry: Class Handout). The poems, which are unsigned and undated are therefore open to analysis to determine the period in which they were written. ...read more.

In 'To Some Builders of Cities' the thinking is decidedly romantic in that an opposition is expressed between the innocence, honesty and morality of natural rural life in comparison to the corrupt and evil city. Yet the lack of archaic language in both the poems would indicate that they were written after the nineteenth century. Consequently, though it is indeed useful to place poetry texts in social and historical contexts, the reader's interpretation and understanding of the poem must be of primary importance. Therefore, I believe that the absence of any information external to the poems has been personally beneficial in my comprehension towards them. ...read more.