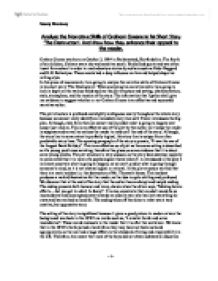 Analyse the Narrative Skills of Graham Greene in his Short Story 'The Destructors' - And show how they enhance their appeal to the reader.

Analyse the Narrative Skills of Graham Greene in his Short Story 'The Destructors'. And show how they enhance their appeal to the reader. Graham Greene was born on October 2, 1904 in Berhamstead, Hertfordshire. The fourth of six children, Graham was a shy and sensitive youth. He disliked sports and was often truant from school in order to read adventure stories by authors such as Rider Haggard and R.H. Ballantyne. These novels had a deep influence on him and helped shape his writing style. In this piece of coursework, I am going to analyse the narrative skills of Graham Greene in his short story 'The Destructors'. When analyzing his narrative skills I am going to look in depth on the various fields such as the plot structure and setting, characterisation, style, atmosphere, and the tension of the story. The information that I gather shall give me evidence to suggest whether or not Graham Greene is an effective and successful narrative author. The plot structure is profound and slightly ambiguous nearly throughout the whole story because we cannot really identify an immediate story line until Trevor introduces the big plan. Although, even from then we cannot really predict what is going to happen next accept just read on. This is an effective use of the plot by the author as it keeps the reader in suspense and as well as entices the reader to read until the end of the story. Although, the story line to some extent is perfectly logical, this story line is unique from other predictable story lines. The opening paragraph of the story is prosaic, "It was the eve of the August Bank Holiday". This is an effective us of plot as the scene setting is described as if a young youth was narrating, therefore this gives us some evidence that it is about some young youths. The plot structure is very unusual, as the story does develop logically to some extent but it is more of a psychological theme when T. ...read more.

Thomas. When T. tells the gang he has been into Mr. Thomas's house, Blackie's reply to him is, "What did you do it for then?". This tells us that Blackie is narrow minded as he has no other motive than theft. We also find that Blackie may be a strong figure on the outside but he is soft inside as he is anxious that they might get caught if they destroy Mr. Thomas's house, "What'd the police be doing all the time". We find that later in the story he is dominated by the power of T.'s leadership style and innovation. There is a change in Blackie's character as we don't see him as no.1 but no.2. The author's characterization of Blackie is fairly simplistic, in the way that he is the common person you have in a gang. In addition, the relationship between him, T. and Mr. Thomas is interesting and keeps us puzzled about why Blackie dislikes Mr. Thomas and why Blackie is somehow under T.'s power, as well as the rest of the gang. We find that Mr. Thomas is a kind hearted person through our perspective; however through the eyes of the gang he is mean. As far as Mr. Thomas's personal life goes we find that he is very stubborn about his money spending as the author points out, "Once a week you could see him coming back across the common with bread and vegetables". This definitely insinuates the idea that Mr. Thomas is not very rich. "I got some chocolates", this line tells us that he is nice towards the kids as chocolate then cost quite a lot; would have be considered important and special. In addition, this tells us that he shows his affection and may be lonely. Another line which suggest that he is a lonely man is that, "sometimes I like company". This implies a very poignant side to Mr. ...read more.

For example, it is symbolic that the gang are doing the destruction on Sunday as this is associated with the Christian pilgrimage. This symbolism is an effective style as it makes the story more complicated than it looks because this makes the reader wonder why the gang chooses Sunday. In addition the author uses sarcasm in the story, for example when T. says, "Not a child's saw". Also, as I have mentioned before that the author uses an effective atmosphere which also creates the tension in to the story. For example, when the author says, "The grey wet common stretched ahead, and the lamps gleamed in the puddles", this conjures up a chilling and oppressive atmosphere. This makes the story effective as it creates a tense atmosphere and has a kind of morbid fascination to the reader, which keeps the reader immersed into the story right up until the end. The author also includes sinister atmosphere in tense situation in the story which builds up the scene to a climax of suspense. The author generally uses oppressive atmosphere in the story as it is the main story line, the destruction of Mr. Thomas's house which is unpleasant. In addition, the author produces sensational dramatic scenes. For example, when T. pleads with the gang to help him complete the destruction, even though Mr. Thomas is approaching his house. Here the reader will be thinking, 'will the gang help him? And what will Mr. Thomas say? I think this was well used by Graham Greene and was very effective. For the reader, dramatic scenes are effective as they keep the reader in suspense and keep him/her firmly focused on the plot. In conclusion, after analysing the narrative skills of Graham Greene it is apparent that he has written an effective story for the reader. Although the story is unusual and some unimaginative use of narrative skills near to the end of the story, it is interesting to note what narrative skills Graham Greene has used and how he has made it effective. Neeraj Bhardwaj - 1 - ...read more.