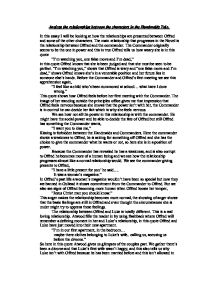 Analyse the relationships between the characters in the Handmaids Tale.

Analyse the relationships between the characters in the Handmaids Tale. In this essay I will be looking at how the relationships are presented between Offred and some of the other characters. The main relationship that progresses in the Novel is the relationship between Offred and the commander. The Commander originally seems to be the one in power and this is true Offred tells us how weary she is in this quote "I'm watching you, one false move and I'm dead," in this quote Offred knows that she is been judged and that she must be seen to be perfect. "I'm watching you," shows that Offred is wary and "one false move and I'm dead," shows Offred knows she's in a venerable position and her future lies in someone else's hands. Before the Commander and Offred's first meeting we see this apprehension again, "I feel like a child who's been summoned at school... what have I done wrong." This quote shows how Offred feels before her first meeting with the Commander. ...read more.

This is a real loving relationship. Atwood fills the reader in by using flashback where Offred will remember a defining moment in her and Luke's relationship, in this quote Offred and Luke have just moved into their new apartment. "I'm in our first apartment, in the bedroom... maybe there clothes belonging to Luke's wife.. calling us, accusing us before the divorce." So here in this quote Atwood gives us glimpses of the couples past. We gather there's been a divorce and that Luke's first wife wasn't happy, and this also tells us why Luke isn't with Offred because he has been married before and this isn't allowed in Gilead. The commander has the relationship with Offred in his house which gives the power to him but this is different with Offred and Luke. The first time Offred and Luke meet (s******y) is in a hotel room, a neutral location so it shows the two to be seen as equal unlike Offred and the commander. An ironic parallel can be drawn between the commander Luke and Offred. ...read more.

"Mother I think...you wanted women's culture. Well now there is one, it isn't what you meant, but it exists," In this quote we see Offred recognising what her mother fought for and it shows understanding between he and her mother which wasn't there before. As well as Moira Offred looks to her mother as a role model. Moira is known as a Martha, so Handmaids and Martha's shouldn't really mix so the relationship between the two is based on trust, one could expose the other for breaking the rules about mixing with others to show they are faithful. The Martha's and handmaids exchange gossip like women do and they try to restore a part of normal life, the two groups (Offred, Moira) support each other, "we sit and tell each other of our aches and p***s, exchange remedies," This quote shows that basic interaction which Offred "longs for," There are very different examples of relationships shown is the novel, of the different ways the characters interact, and the roles they play in each others lives. Because of the way the book is written we see everything form Offred's point of view and we see how others comments and actions effect her. ...read more.