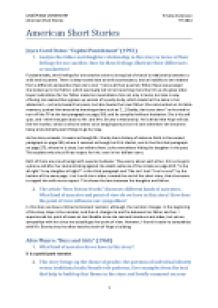 ï»¿LINKÖPINGS UNIVERSITET Emelie Andersson American Short Stories HT 2012 American Short Stories ________________ Joyce Carol Oates: “Capital Punishment” (1992) 1. Analyze the father and daughter relationship in this story in terms of their feelings for one another. How do these feelings illustrate their differences or similarities? Fundamentally, their feelings for one another seem to be typical of that of a relationship between a child and its parent. There is deep-rooted love as well as annoyance, and an inability to see matters from a different perspective than one’s own – hence all their quarrels. When Hope was younger she looked up to her father, which eventually led to her becoming more like him as she grew older. Hope’s admiration for her father made her resemblance him not only in looks, but also in way of being. He seemed like a grown up version of a pushy bully, which made her the same in her adolescent – not only toward her peers, but also toward her own father. She commented on his table manners, pushed him around by shouting orders such as “[…] Daddy, don’t you dare!” as he tried to turn off the TV at the last paragraph on page 266, and he complied without hesitation. She is his soft spot, and I think that goes back to Mr. and Mrs. Brunty’s relationship. He is afraid that Hope will act like her mother, which is why he seems to be stepping around on his toes whenever she becomes bossy and promptly want things to go her way. ...read more.

We could make out the tall frosted shapes of the windows now, gloomy and white.”. This passage indicates that it is later than 1913, since the song “Danny Boy” wasn’t released until that year. We also get to know that this short story is set during the winter. Page 174, middle of the second paragraph; “After the war the farmers were buying tractors and gradually getting rid of horses altogether, […]”. This lets us know that the story is set somewhere in the late 1940’s or early 1950’s, since that is after the war. We assume the narrator means WW2, since it was around those years that cars started to get more common. Amy Tan: “The Joy Luck Club” (1989) 1. This history takes place during one evening in San Francisco, but through the use of flashbacks the perspective widens, both in the terms of time and place. What are the different time periods covered by the story and how does the chronology of the events compare to the order of narration? What is the effect of narrating the evens in this order? We get glimpses from both present (around 1987), and past time; all the way back to about 1937, 1949 and somewhere around 1965. So, the time periods that this short story covers is about 50 years, from 1937-1987. The story is not written chronologically; it jumps from 1987 ï explanations from 1949 ï stories June heard during her childhood around 1965 ï 1937, where the story told takes place, and back again to present time. ...read more.

Can you think of any way in which the author may have guided our feelings for the different characters in this story? Well, yes. We get to know Mrs. Dutta and her thoughts in a way that only expresses her good intentions, and it makes it hard for us to see it from the family?s POV. We don?t get to see what Molli, for instance, really thinks about Mrs. Dutta?s efforts until the end when she has a breakdown and confesses to her husband. Since we only got Mrs. Dutta?s POV, we thought about the other characters in the family in the same way that she thought about them ? rude and behaving and strange behaviors. Questions relating to all short stories 1. What kind of themes can we find in these short stories? Can we see similar themes? Are there themes that unite the stories, themes that separate? We can find several themes in these stories. There are the relationships between different generations, how they differ within a family, how the children and parents evolve in different directions ? growing apart rather than growing together. 1. All four short stories depict American society; its time and values. Give three examples of your own to show how these stories reflect the society which gave rise to them. Racism or suspicion toward immigrants or afro-americans. (Mrs. Dutta Writes a Letter, Capital Punishment, The Joy Luck Club) The debate regarding death penalty in America (Capital Punishment) Providing for oneself, making a living for oneself. Almost capitalism. (Capital Punishment, Boys and Girls, The Joy Luck Club, Mrs. Dutta Writes a Letter) ...read more.