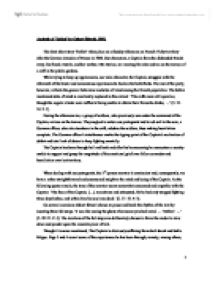 Analysis of 'Defeat' by Osbert Sitwell. 1948. The short short story 'Defeat' takes place on a Sunday afternoon on French Vichy-territory after the German invasion of France in 1940. Our characters, a Captain from the disbanded French army, his fianc�, Estelle, and her mother, Mrs Dorien, are meeting for cake and tea on the terrace of a caf� in the public gardens. While trying to keep up appearances, our main character, the Captain, struggles with the aftermath of the brutal and momentous experiences he had on the battlefields. The rest of the party, however, reflects the general behaviour and state of mind among the French population. The before mentioned state of mind is excellently captured in this extract: 'The caf�s were still open too, though the regular clients were ruffled at being unable to obtain their favourite drinks, ...' (ll. 31-32. P. 1). During the afternoon tea, a group of soldiers, who previously was under the command of the Captain, arrives on the terrace. They neglect to salute our protagonist and to rub salt in the sore, a German officer, who sits elsewhere in the caf�, rebukes the soldiers, thus making humiliation complete. ...read more.

... 'Defeat.' ...' (ll. 20-21. P. 4). The locations of the full stops are deliberately chosen to force the reader to slow down and ponder upon the concrete piece of text. Though it is never mentioned, The Captain is obviously suffering from shell shock and battle fatigue. Page 3 and 4 reveal some of the experiences he has been through; namely, among others, overwhelming German striking power, the grim sight of fallen soldiers in ditches, and the sounds of thunder-like machine guns. He cannot let go of the '...sights and sounds ...[they are]... more real to him than the silvery perspective of tall, shivering poplars...' (ll. 10-11. P. 4). The extract reveals, that he mentally has not come home yet. In addition to his absentmindedness, he his also both physically and mentally defeated. His defeat is described in the sixteen-fold repetition of 'Defeat.' throughout the text but also pictured in a metaphor at the very beginning: 'Battle alters the face of the world, but defeat and collapse may at first leave it intact, just as a gutted house often shows no change, except for its dead, blank windows.' ...read more.

she had not fully grasped that the French army was in dissolution.' (ll. 3-12. P. 5). Her thoughts are, compared to the Captain's, not thoroughly described. This indicates, in a slightly humorous way, that she does not understand the situation. 'Defeat' evolves around the issue of homecoming soldiers' alienation from their surroundings. The Captain has returned to a society with a general reluctance to speak about the elephant in the room. The surroundings' hesitant willingness to speak about his experiences and feelings has a self-perpetuating effect. The longer they avoid the subject, the more unbearable it gets. The German Officer's interference marks breaking point for the Captain, but there is no doubt, that he eventually would break either way. One could argue, that the German Officer's rebuking of the French soldiers is not meant as a humiliation, but merely a friendly gesture to restore normality. However, for the Captain the gesture serves as the inevitable and devastating realisation of despair. 'Defeat' does not reveal Estelle's, who also serves as metaphor for society, reaction to the humiliation. It is left for the reader to contemplate whether Estelle and society are capable of handling the changes the Captain has been through. ?? ?? ?? ?? 1 ...read more.