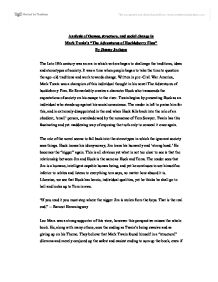 Analysis of themes, structure, and social change in Mark Twain's "The Adventures of Huckleberry Finn" By Jimmy Jackson The Late 19th century was an era in which writers began to challenge the traditions, ideas and stereotypes of society. It was a time when people began to take the time to question the age- old traditions and work towards change. Written in pre -Civil War America, Mark Twain was a champion of this individual thought in his novel The Adventures of huckleberry Finn. He Remarkably creates a character Huck who transcends the expectations of society on his escape to the river. Twain begins by presenting Huck as an individual who stands up against his social conscience. The reader is left to praise him for this, and is extremely disappointed in the end when Huck falls back into the role of an obedient, 'small' person, overshadowed by the nonsense of Tom Sawyer. Twain has this fascinating and yet maddening way of exposing the truth only to conceal it once again. The role of the novel seems to fall back into the stereotypes in which the ignorant society sees things. Huck looses his idiosyncrasy; Jim loses his humanity and 'strong head.' He becomes the "n****r" again. ...read more.

So why does he do this? It seems that Twain wants to create a sort of Frustration factor in the end. As the readers, we feel we are with Huck when he befriends the Jim on the island. We are with him as he lies on the raft starring up at the stars, we are up in the tree with him as he watches the Grangerfords and Shepardsons kill themselves. We Travel beside him through all the adventures and knowledge he gains. In the end when he turns his back on us and himself, we feel the need to jump into the book and drag Huck kicking and screaming back to the river; the one place that we are free to move forward and continue his voyage. "After all this long journey. here was it all come to nothing, everything all busted up and ruined, because they could have the heart to serve Jim such a trick as that and make him a slave again all his life and amongst strangers too...for forty dirty dollars." --Huck finn pg. 200. This same resentment is felt by the reader who feels 'tricked' by Huck and Twain. In a way, we ARE tricked by them. ...read more.

He unconsciously open "The damned human race" to the truths discovered in Huck's adventures. Mark Twain's Novel was his way of encouraging individuals to leave the restrictions and fallacies of Society. He presents the idea that in order for (greatly needed) change to occur in a 'motionless' society of mob mentality, one must be released from society. We need to escape our social conscience to nurture our individual minds. He exposes this by showing the inevitability of Huck to assimilate into society and return full circle to where he was in the beginning, once he is re-exposed to Tom and the rest of society. The only time Huck was moving forward and maturing was while he was on the river. When individual thoughts cease to exist, so does movement and change. When movement halts, we are thrown back into the perpetual cycle that Huck exhibits. The adventures of Huckleberry Finn was masterfully written by Mark Twain to stir the reader into feeling frustrated by the ending, which was actually the status quo of there society. It creates the desire to build a raft of our own, where we could finish the 'quest' that Huck had failed to accomplish, leaving our hearts waiting at the edge of the river contemplating which way to go. ...read more.