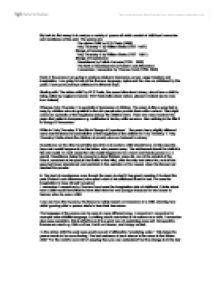 Analyze a variety of poems all which consist of childhood memories and reminisces of the past.

My task for this essay is to analyze a variety of poems all which consist of childhood memories and reminisces of the past. The poems are: - The stolen Child by W.B Yeats (1886) - Holy Thursday 1 by William Blake (1757 -1827) (Songs of Innocence) - Holy Thursday 2 by William Blake (1757 - 1821) (Songs of Experience) - Casabianca by Felicia Hemans (1793 - 1835) - The land of Counterpane by Robert Louis Stevenson - I remember, I remember by Thomas Hood (1799-1845) Each of the poems I am going to analyze relates to innocence, power, anger freedom and imagination. I am going to look at the themes, language, topics and the view on childhood by the poets. Each poem portrays childhood in different ways. Starting with 'The stolen child' by W.B Yeats, the poem talks about misery, about how a child is being called by angles to heaven. W.B Yeats talks about nature, places in Ireland (as he was from Ireland). Whereas Holy Thursday 1 is symbolic of innocence of children. The poem is like a song that is sung by children who are grateful to the rich people who provide them with a school. The bright colors are symbolic of the happiness and joy the children have. There are many words in the poem that relate to innocence e.g. ...read more.

By doing this she has to pretend to be in the surroundings, to be able 2 describe the key features in her poem. The Land of Counterpane uses alliteration in the first line 'giant great.' The language uses a lot of contract, how a hill is like a pillow? Dale is a low place in between mountain like a valley, using his imagination to create his own fairy tale can be seen when he uses the words 'giant great' Giant is symbolic of a character in fairy tale like jack and the beanstalk. Also the child can be a 'Giant' in other words central to everything, recognized and his presence to be known. I remember, I remember uses a lot of childlike actions in the language context. The last two lines of each stanza indicate that he is ill, in his present life and the rest of the stanza is remembering his childhood. Childhood in the pre 1914's was much different from today's society. Children in those times were more isolated than anything else and were not granted as much freedom as children of today's society. In those times children more than often were neglected. Since then, times have evolved and children are seen and recognized as pure innocent human beings. The Stolen child was written in a time where religion was a constant presence. ...read more.

The poems strong words are effective as it shows the emotion that he either saw or was feeling. Felicia Hemans uses her imagination to visualize the experience of a young boy causing him to fall to death soon after his role model, his father departed. The young boy believed in his father so much he did not move from his post, until he could have his fathers command. His commanded post becomes a 'lone post of death'. The language used was melodramatic, 'a creature of heroic blood'. Although it is over dramatic it is effective, it shows the sentimental feeling the poet was having. Robert Louis Stevenson uses short words, short lines and great meaning. This poem is effective as a whole. If one was to do research on the poem and the poet, you would find the childhood story of Stevenson. Thomas Hood's interpretation of childhood is also relating to his present life as an adult. The continuous reference to nature and innocence is effective as it shows emotions as a child and as an adult. The poet also flickers between the present and the past which brings about the point of the childhood being a major part of his life and now he is remembering it. In conclusion I can see that childhood can play a major role in a person's life as it is where life begins, and where a person begins to experience life's lessons. By Sumaira Bashir ...read more.