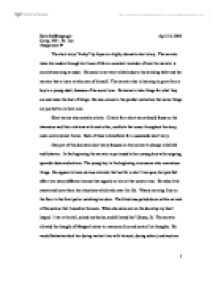 Katie Raffensperger April 15, 2005 Comp. 200 - Dr. Lee Assignment #4 The short story "Araby" by Joyce is a highly dramatic short story. The narrator takes his readers through his times of life is a constant reminder of how the narrator is slowly becoming an adult. His uncle is not very reliable due to his drinking habit and the narrator has to learn to take care of himself. The narrator also is learning to grow from a boy to a young adult, because of his secret love. He learns to take things for what they are and make the best of things. He also comes to the painful realization that some things are just better on their own. Short stories also contain criteria. Criteria for a short story should focus on the characters and their relations with each other, conflicts that occur throughout the story, and a controversial theme. Each of these is beneficial for a successful short story. One part of this dramatic short story focuses on the narrator's change in beliefs and behavior. In the beginning the narrator is portrayed to be a young boy with outgoing, sporadic ideas and actions. ...read more.

In this part of the short story, the author shows how the narrator has grown in some ways and yet is still a young boy because of his one train of thought. Instead of the narrator reaffirming his love or realizing that he does not need gifts to express his feelings for Mangan's sister, he gives up. When he arrives at the Bazaar and everything is closing because it is dark he interprets that as a sign that his relationship with Mangan's sister will also remain a wishful idea and is also a misguided idea, just as the Bazaar was. Another major part of some short stories is that it must have a striking conflict that leads to a crisis or a predicament. During the story "Araby" the narrator runs into a bunch of little predicaments that lead up to the big relationship crisis at the end. One of the first problems the narrator runs into is when he is interested in going to the Bazaar and he needs money from his uncle. It is uncle does not get home until 9 pm and by that time the narrator has to race to get to the Bazaar. ...read more.

Just little clues like this pop up throughout the short story that make the theme more pronounced. Throughout the short story "Araby", it contains criteria which allow its readers to have a certain mindset when reading. The criteria for this short story focuses on the relationships between the characters, the conflicts that lead to the narrator's crisis, and a theme that no other short story is know for. The theme for this short story is something that every reader can relate to and that is why it is as popular as it is today. Every reader, whether male or female, can relate to growing up from a young child to a teenager and/or adult. When that time comes for young children to change into adults, it is difficult for some to handle and actually realize what their purpose is in life. When children are going through this tough time, this is when they count on their parent/guardian to console them and help them through it. This was unfortunately not the case for the narrator in "Araby" and by the end of the story the reader may come to realize that this little escapade will scar him for life. ?? ?? ?? ?? 1 ...read more.