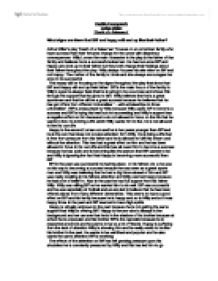 Arthur Miller - Death of a Salesman

What signs are there that Biff and happy will end up like their father? Arthur Miller's play 'Death of a Salesman' focuses on an American family who have success then their fortunes change for the worst with disastrous consequences. Willy Loman the main character in the play is the father of the family and believes he is a successful salesman. He has two sons Biff and Happy who look up to their father but they both change their feelings about their father throughout the play. Willy always focuses his attention on Biff and not Happy. The mother of the family is Linda and she always encourages her sons to be successful. This essay will be focusing on the signs throughout the play that show that Biff and Happy will end up their father. Biff is the main focus of the family in Willy's eyes he always feels that he is going to be a success and shows this through the support that he gives to him. Willy believes that he is a great sportsman and that he will be a great success because he believes that he has got offers from different Universities "...with scholarships to three universities". Biff is pressurised by Willy because Willy wants biff to become a success and Biff is trying his best but not succeeding ...read more.

Biff has no job and has no University place and he is hiding it from his father because he doesn't want to disappoint his father but the truth is that because all the pressure Willy has placed upon Biff has had a negative effect on him and he is no longer the person he once was he has no vision of becoming like Willy and he does not want to be a salesman like Willy he has changed and he now has a different dream which he wants to fulfil it he does not want to admit it to his father. The effects of lack of attention and pressure that was placed upon Happy has had a positive effect because he was almost unknown in the past and Willy hardly showed him any attention and from this he has worked himself up to being the person in which Biff aspired to be in the future. He has a job and is respected and he is a hit with the women and this is what Biff was like in the past. So the lack of attention in which Willy showed to happy has spurred him on to prove to Willy that he is a success and he has a vision to follow his father to becoming a success. ...read more.

so he may in fact end up like his father. I believe that Happy may not end up like his father because he has worked himself up to a success without the support from his father so he was free to do what he liked and he set out to prove himself to his father and he really has become everything Biff should have become and so I do not believe he will end up like his father. However he may believe that he is better than everyone thinks and he may inherit this from Willy and this could lead to his downfall and he may not be able to take being as failure. But I do think they will be fuelled by the death of their father and this may make Biff and Happy be able to follow their dream and work together so both of them may never end up like their father because in the first act Biff says "Listen, why don't you come out West with me?" and then he says "Sure, maybe we could buy a ranch. Raise cattle, use our muscles..." and happy replies "The Loman Brothers, heh?". This is the dream which they both may go into and this make them a success and become nothing like their father because this is something that Willy would not dream of doing. ?? ?? ?? ?? English Coursework Arthur Miller 'Death of a Salesman' ...read more.