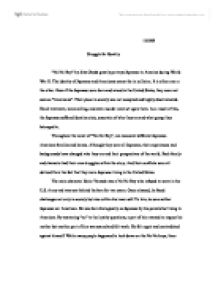 11/2/08 Struggle for Identity "No-No Boy" by John Okada greatly portrays Japanese in America during World War II. The identity of Japanese and Americans cannot be in collision. It is either one or the other. Even if the Japanese were born and raised in the United States, they were not seen as "Americans". Their place in society was not accepted and highly discriminated. Harsh treatment, name calling, and even murder were set upon them. As a result of this, the Japanese suffered identity crisis, uncertain of who they are and what group they belonged to. Throughout the novel of "No-No Boy", we encounter different Japanese-American families and homes. Although they were all Japanese, their experiences and backgrounds have changed who they are and their perspectives of the world. Each family and character had their own struggles within the story. And their conflicts were all derived from the fact that they were Japanese living in the United States. The main character Ichiro Yamada was a No-No Boy who refused to serve in the U.S. Army and was sent behind the bars for two years. ...read more.

She spent years waiting for his return. Even as much as she wished for him to come back, a part of her felt pride and patriotic to be an America. However, in reality they were all just Japanese. Japanese and Americans didn't mix and their membership in American was denied. To be American, was an identity. America was a place for home. Living in America, doesn't necessarily mean you're an American. For Ichiro and all the other Japanese in "No-No Boy", were Japanese, not American. Even if they served in the war for the United States, they were still considered to be Japanese. In fact, they all suffered identity crisis. Some, like Kenji, Taro, and the Kumasakas, chose to believe they were Americans. But the rest of America, didn't see them as Americans. They were living in America, but weren't free. They couldn't even choose to be who they wanted to be or wanted to believe in. While America was a place known as the land of freedom, they were all slaves. Ichiro was sent to prison because he didn't serve in the U.S. ...read more.

If serving in the U.S. Army doesn't make a person American, what better way is there to prove it? If the Japanese who served for the United States aren't classified as Americans, no one else should be classified as Americans. They've sacrificed their lives and showed respect to America more than any other American who had white skin and blue eyes. The identity of "American" was supposed to be a reference of freedom, hope, and opportunity. Many people strived for this title. However, it wasn't the case. The Japanese weren't considered as Americans. They were freer in Japan, than in America. Even having to live through discrimination and inhuman treatments, they were not American. They lived each day in fear, not knowing what would happen to them. Was this America? Where was the freedom? It was more like prison, if not worse. Identity was nation based. A person should have the freedom to choose what they want to be and what not to be. Life is full of opportunities and how you choose to live your life is up to you. Live according to your own beliefs and follow your own path and make the best of it. Citation: Okada, John. No-No Boy. Seattle: University of Washington Press, 1977 ...read more.