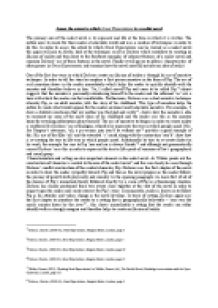 Assess the extent to which Great Expectations is a realist novel

﻿Assess the extent to which Great Expectations is a realist novel The primary aim of the realist novel is to represent real life at the time in which it is written. The author aims to create for their reader a believable world and uses a number of techniques in order to do this. In order to assess the extent to which Great Expectations can be viewed as a realist novel this paper will aim to, firstly, look at the techniques used by Dickens which contribute to creating an illusion of reality and then draw to the forefront examples of inherent features of a realist novel and examine Dickens? use of these features in the novel. Finally it will go on to address characteristics of other genres in Great Expectations and examine how the novel may fall outside our idea of realist. One of the first key ways in which Dickens creates an illusion of reality is through his use of narrative technique. In order to tell the story he employs a first person narrative in the form of Pip. The use of such narration draws in the reader immediately which helps the reader to quickly identify with the narrator and therefore believe in him. ...read more.

It has a clear engagement throughout with particularly striking elements of Victorian society. Throughout the novel Dickens deals heavily with the contemporary issue of social class. The reader of Great Expectations meets a range of characters from throughout the social class system and is presented with a stark contrast between them all. For example, the striking contrast between Pip and Estella as children. She overtly criticises his lower class ways and condescendingly refers to him as ?boy?[7] repeatedly as if he is an inferior being to herself. By drawing such a stark contrast between the characters of different social classes Dickens is able to draw to the attention of the reader the unfairness of the class system. As well as the unfairness of the system, Dickens highlights the negative effects of the class system through the way in which Pip?s elevation to a higher social standing has left him with contempt for Joe who has cared about Pip all his life. Dickens carefully shows the difference between the two characters when they first meet and greet each other in London -?Joe, how are you Joe?? and ?Pip, how air you Pip??[8] Pip?s use of Standard English compared to Joe?s dialectic speech illustrates the difference between them and the rift that would appear. ...read more.

For example, Pip?s infatuation with Estella serves to be an important catalyst in the novel. His love for her is his motivation to be a gentleman and reach an elevated social position, around which a large part of the plot is based. Walder has also pointed out another element of the novel which fits into the romance genre, in the sense of Magwitch as Pip?s benefactor. He argued that this resembles the romance genre whereby distant or long-lost relatives can turn up when they cause most surprise.[13] These examples again demonstrate a far departure from the realist elements of the text. It is clear from the argument above that, despite initial examination, it would prove exceptionally difficult to categorize Great Expectations as a purely realist novel due to the sub-genres that it so clearly contains. However, it remains that clear that realism is a strong genre within the novel and many elements are covered that fulfil the primary aim of the realist novel. It is also necessary to note that there are quite possibly a number of other interpretations and genres within the novel that have not been addressed here and therefore the fairest conclusion to draw is that one must refrain from trying to categorize this novel as any particular genre but look at it as having many realist features with numerous possible sub-genres within. ...read more.