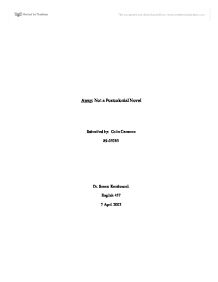 Away: Not a Postcolonial Novel

Away: Not a Postcolonial Novel Submitted by: Colin Cameron 89-03783 Dr. Smaro Kamboureli English 457 7 April 2003 Introduction Jane Urquhart's novel Away has been presented as an example of a postcolonial novel (Wyile, 1999). A close examination of the novel reveals that this is not so. The novel is a historic novel and the historical events that it relates are those of the colonizers. Also, and more importantly, the novel only contains one First Nations character. As the only First Nations character, one cannot overlook Exodus Crow for evidence of postcolonialism. Urquhart's treatment of Exodus Crow as 'other' is the most poignant point that quells arguments advocating Away as postcolonial. Urquhart's Portrayal of History Away has been included in many different genres, but it must always, at least in part, be considered a historical novel because it recounts historical events. It is through the account of the historical events in the novel that it loses its credibility as a postcolonial novel. One of the tenets of postcolonialism is that "literature is often evasively and crucially silent on matters concerned with colonialism and imperialism" (Barry, 1995). Although Away cannot be said to be completely silent regarding colonialist matters, the historical events that serve as a backdrop for the story are presented from a colonialist viewpoint. ...read more.

The novel does very little to the history of Canada as something other than Canadian. There is no attempt to rewrite a history or to include the history of the people whose land was being taken. The historical events that are recorded are Euro-centred, both in their nature and the perspective that they are presented. Part of the postcolonial stance is that the colonized people attempt to "write their way back into a history" (Culler, 131). Away presents quite the opposite history. It reports a European history of colonization without questioning the ethics of those events. The assassination of D'Arcy McGee is the highlighted as the major political event of the time. The treatment of the indigenous peoples, although alluded to, underplays the importance of the Irish struggle in Canada. Postcolonialism is about overcoming this narrow view of history, not perpetuating it. As such the history in the book is consistent with the colonialist discourse and therefore perpetuates the oppression established by the empirical government. Exodus Crow As a historical novel Away is a novel that focuses on the European colonization of Canada. When considering Away as a postcolonial novel it is vital that the perspective of the colonized people is acknowledged. Exodus Crow is the only First Nations character in the novel. ...read more.

Liam, who represents the capitalist colonizer, does not believe her. This bond between the women and the only First Nations character is consistent with the feminization of First Nations people that served to present them as inferior to the viral European and justify their oppression. Such a view does not challenge the colonial view of the indigenous people, it reinforces it. As such this portrayal of Exodus Crow cannot be viewed as postcolonial. It is the goal of the postcolonial critic to observe instances in which the colonized people attempt to "write their way back into a history" (Culler, 1997). In this case it is another instance where the history of a First Nations person is presented as serving the story, and the therefore the history, of a white family. The proliferation of the history of white people is not postcolonialist. Conclusion Although Away produces an awareness of the issues of colonialism in its marriage of magic realism, myth and history, it cannot be definitively described as a postcolonial novel. The way it presents historical events and its treatment of indigenous peoples is not consistent with postcolonial ideals. It perpetuates the ideology and attitude of the colonizing peoples. Postcolonialism is more than just a temporal separation of colonialism; it is a change in the attitudes that contributed to oppression. The contribution of Away to the national imaginary in Canada gestures towards a better society, but falls short of initiating that change. ...read more.