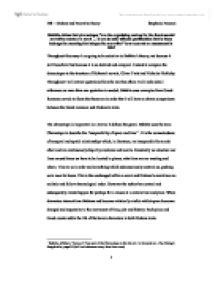 Bakhtin claims that chronotopes &quot;are the organising centres for the fundamental narrative events of a novel ... It can be said without qualification that to them belongs the meaning that shapes the narrative&quot; how accurate an assessment is this?

Bakhtin claims that chronotopes "are the organising centres for the fundamental narrative events of a novel ... It can be said without qualification that to them belongs the meaning that shapes the narrative" how accurate an assessment is this? Throughout this essay I am going to be selective in Bakhtin's theory, not because it isn't beneficial but because it is so detailed and compact. I intend to compare the chronotopes to the structure of Dickens's novels, Oliver Twist and Nicholas Nickleby. Throughout I will extract quotations from the text but oftern I will make detail references as more than one quotation is needed. Bakhtin uses examples from Greek Romance novels to focus the theory on in order that I will have to drawn comparisons between the Greek romance and Dickens's texts. The chronotope is imperative in a text as it defines the genre. Bakhtin uses the term Chronotope to describe the 'inseparability of space and time'1. It is the connectedness of temporal and spatial relationships which, in literature, are inseparable from each other and are continuously shape by emotions and morals. Constantly we structure our lives around times we have to be located in places, what time we are meeting and where. Time to us is order and something which subconsciously controls us, pushing us to meet its hours. This is the unchanged within a novel and Dickens's narratives are realistic and follow chronological order. However the author has control and subsequently events happen for perhaps for a reason at a certain time and place. When characters interact time thickens and become artistically visible whilst space becomes charged and responsive to the movement of time, plot and history. Each place and timed events add to the life of the heroic characters in both Dickens texts. Looking further into Bakhtin's theory, to give us a greater understanding, he focuses on the three novelistic chronotopes, the 'adventure novel of ordeal', the 'travel novel' and the 'adventure novel of everyday life'. ...read more.

This gives the author the chance to describe in detail all that the hero encounters. Oliver observes "wondering at the great number of public-houses (every other house in Barnet was a tavern, large or small), gazing listlessly at the coaches as they passed through, and thinking..."23. Whilst Nicholas examines "Some London houses have a melancholy little plot of ground behind them, usually fenced in by four high whitewashed walls..."24 Therefore it can be said that Chronotopes 'shape the narrative' Nevertheless the hero of Greek Romance is not governed by anything in his alien world so he can only be affected by random contingency. On the other hand, Nicholas has got family ties and these are the reason for his journey in the first place. Oliver is governed by his morals and the society that surrounds him. He is continuously concerned with the representation to others. Both Oliver and Nicholas are much more active hero than that of the Greek Romance and are therefore not solely affected by random contingency. Another novelistic Chronotope that Bakhtin considers is the travel novel. Here the hero "is the public and political man of ancient times, a man governed by his socio-political, philosophical and utopian interests"25 which is how a modern reader could see Nicholas. In the travel novel the hero's journey shapes the chronological sequence and is relied upon to organise the time scheme, such is the time structure in Nicholas Nickleby. In this type of novel though the hero is still passive, he does not take the initiative and act, things merely happen to him; fate controls his life. Dickens suggests in both novels that the lives of people of all positions may become intertwined. Nobody is safe from being influenced by the actions of others, possibly even complete strangers. Nevertheless, although Nicholas does meet many people along his journey, he tends to have some type of control and direction in his life and makes affirmative decisions; Newman describes him to "have some deep scheme in your head"26. ...read more.

All these points exist in both Nicholas Nickleby and Oliver Twist and don't even have to be altered to as a great deal of the other chronotopes do, which portays the chronotopes are the organising points of the narrative. For example in Nicholas Nickleby, Nicholas begins homeless and although he has relative in Kate, his mother and uncle, he has no means of proper support. After being sent off by Ralph, Nicholas does indeed encounter both misfortune, at the hands of Squeers, and Success, with the theatre and eventually with the cheeryble brothers. Additionally he creates fundamental and family connections, again the cheeryble brothers and Madeline. He is, as Bakhtin states, taken out of the alien world and placed into the small stable world of family. To conclude, the examples I have given clearly portray that Bakhtin's theory of the chronotope fits not only into the Greek Romance novel but to the texts of Dickens highlighting that to a certain extent the chronotopes do shape the narratives. Nevertheless at times I had to be selective in the text and pull the text to fit into the theory. This shows that it has an impact on the formation of the narrative but it doesn't necessary, especially with such determination as "it can be said without qualification", organise and create the meanings. As highlighted it can be considered that it is the tradition, expectations and the author's background that influences the texts. Nevertheless the author's ideas are portrayed through the characters and themes and I have clearly conveyed how the chronotopes can shape these with the texts. Overall, I believe that a text in organised and shaped by a number of aspects, certainly one of these is Bakhtin's chronotopes, but I am not entity sure that they can stand alone. It appears that you can argue that it does but often there is an opposing argument. ...read more.