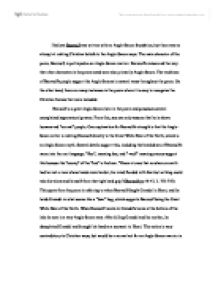 I believe Beowulf was written with an Anglo-Saxon foundation, but there was an attempt at relating Christian beliefs to the Anglo-Saxon ways. The main character of the poem, Beowulf, is portrayed as an Anglo-Saxon warrior. Beowulf's values and the way that other characters in the poem acted were also primarily Anglo-Saxon. The traditions of Beowulf's people support the Anglo-Saxons in several ways throughout the poem. On the other hand, there are many instances in the poem where it is easy to recognize the Christian themes that were included. Beowulf is a great Anglo-Saxon hero in the poem and possesses several unexplained supernatural powers. From this, you can only assume that he is above humans and "normal" people. One explanation for Beowulf's strength is that the Anglo-Saxon writer is relating Beowulf directly to the Great White Bear of the North, which is an Anglo-Saxon myth. Several details support this, including the breakdown of Beowulf's name into the root language. "Beo", meaning bee, and "-wulf" meaning enemy support this because the "enemy" of the "bee" is the bear. "Knew at once that nowhere on earth had he met a man whose hands were harder; his mind flooded with fear-but nothing could take his talons and himself from that tight hard grip."(Beowulf pp.46-47, ll. ...read more.

Here Beowulf asks Wiglaf to bring treasure before his death, which shows Beowulf's materialistic views. This supports the theory that Beowulf performed all of his actions for fame and glory, not charity. Performing these actions for fame does not support Christian values at all and is more evidence on how Beowulf is primarily an Anglo-Saxon character. The dragon that Beowulf battles in the end of the poem shares with Grendel's mom the fact that they both were getting revenge on their enemies. Each character was violated in one way or another, the dragon getting his gold cup stolen and Grendel's mom defending her son. According to Anglo-Saxon beliefs revenge is tolerable, and because neither of these characters acted first in battle, they were justified. However, if one were to look at Christian beliefs, revenge is not tolerable and neither the dragon or Grendel's mom would be justified in their violent acts of revenge. Beowulf does have an attitude that differs between Christina values and Anglo-Saxon values. Depending on the situation, Beowulf will express one or the other. "Yet he makes Beowulf an admirable Christian except when Christianity and the warrior code conflict. Then Christianity comes off a poor second-as it did with most Anglo-Saxons."("Chapter 4-The Anglo-Saxon View" p.33) This is an example of the order that Beowulf's priorities were set and also how his community influenced him to lean more towards the ways of Anglo-Saxons. ...read more.

"There is no doubt whatever that the Beowulf-poet has gone out of his way to exclude all the old pagan gods from an active place in his poem. The one referred to throughout by Hrothgar and Beowulf alike is the one, providential God of the Christians."(McNamee p.332) Another event in the poem that could be interpreted as Christian is when Beowulf travels to the lake of Grendel. Many symbols can be found here, such as the lake being h**l, and after Beowulf kills Grendel's mother it seems as though Heaven shines upon him. "Her body fell to the floor, lifeless, the sword was wet with her blood, and Beowulf rejoiced at the sight. The brilliant light shone, suddenly, as though burning in that hall, and as bright as Heaven's own candle, lit in the sky."(Beowulf p.72 ll.1567-1573) Another example of Christianity in the poem is the reason for Grendel terrorizing the Danes. He is not necessarily evil, but Grendel could actually be seen as a monster sent by God. "And, assuming a little different position, one notes that Grendel is the agent, not the enemy of God; he was sent to punish the Danes and the poet was only adding his touch of cunning subtlety when he said Godes yrre baer [he bore God's anger]."(Baum p.358) This author is writing that Grendel is not evil, but he is actually good and was meant to torture the Danes for their behavior. ...read more.