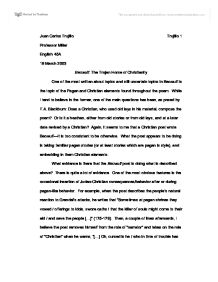 Beowulf: The Trojan Horse of Christianity.

Juan Carlos Trujillo Trujillo 1 Professor Miller English 45A 19 March 2003 Beowulf: The Trojan Horse of Christianity One of the most written about topics and still uncertain topics in Beowulf is the topic of the Pagan and Christian elements found throughout the poem. While I tend to believe in the former, one of the main questions has been, as posed by F.A. Blackburn: Does a Christian, who used old lays in his material, compose the poem? Or is it a heathen, either from old stories or from old lays, and at a later date revised by a Christian? Again, it seems to me that a Christian poet wrote Beowulf-it is too consistent to be otherwise. What the poet appears to be doing is taking familiar pagan stories (or at least stories which are pagan is style), and embedding in them Christian elements. What evidence is there that the Beowulf poet is doing what is described above? There is quite a lot of evidence. One of the most obvious features is the occasional insertion of Judeo-Christian consequences/behavior after or during pagan-like behavior. For example, when the poet describes the people's natural reaction to Grendel's attacks, he writes that "Sometimes at pagan shrines they vowed / offerings to idols, swore oaths / that the killer of souls might come to their aid / and save the people [...]" (175-178). ...read more.

This definition surely has some support, since time after time we see Hrothgar and Beowulf's behavior as Christian. For example, very often they thank God when things well in battle, and even acknowledge that if things do not go favorably, it must be the will of God, as would any devout, faithful Christian. For example, when Beowulf is going to fight Grendel, he tells his fellow Geats that he will face Grendel unarmed and "[...] may the Divine Lord / in His wisdom grant the glory of victory / to whichever side He sees fit" (685-687). Hence, he is reinforcing what the poet boldly states before, and which I have already quoted Trujillo 4 above-i.e. that " [...] the truth is clear: / Almightily God rules over mankind / and always has" (700-702). Aside from making their behavior Christian, it seems to me that the poet also structures Hrothgar and Beowulf's lives and destinies in a holy fashion. For example, Hrothgar is a very God-like character. We read early on that after having been successful in war, "friends, and kinsmen flocked to his ranks / young followers, a force grew / to be a mighty army. ...read more.

One is the medication and the other is, for example, the medication implanted into a piece of chocolate. The child will most likely take the chocolate, but in doing so, will also take the medication. While the argument above seems to have some validation, there are some questions that are still open, as well as some problems. For example, while I made an argument that the poet is Christian writing though a pagan prism, I did not refute the other theory, which again is that the poet is a heathen, and that a later time a Christian scribe gave it a Christian flavor. This is not likely (at least I do not believe) but it is still a theory. Secondly, while it is fairly clear that the Beowulf poet is carefully weaving Christianity into this poem, it seems to me that he is not really asserting any Christian doctrine. It seems that he is simply showing the reader how ought Christians behave, rather than why. While I believe this may be due to taking a more cautious approach (i.e. continuing the above analogy: giving them their medication in small dosages rather than the entire prescription at once), this is still something that can be explored further. ...read more.