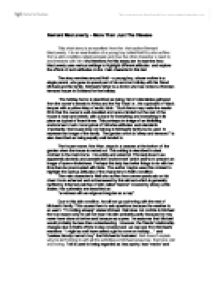 Bernard MacLaverty - More Than Just The Disease This short story is an excellent from the Irish author Bernard MacLaverty. It is an examination of a young boy called Neil Fry who suffers from a skin condition called psoriasis and how the other characters react to, and interacts with him. My intentions for this essay are to examine how MacLaverty uses various settings to highlight different attitudes and explore the effects of such attitudes on the main character in this text. The story revolves around Neil - a young boy, whose mother is a single parent, who goes to spend part of his summer holiday with his friend Michael and his family. Michael's father is a doctor who has rented a Victorian terraced house in Scotland for the holiday. The holiday home is described as being full of collectables gathered from the owner's travels to Africa and the Far East i.e., the cupboard of "black lacquer with a yellow inlay of exotic birds." Such items may make the reader think that the owner is well-travelled and open-minded but the rest of the house is neat and orderly with a place for everything and everything in its place as typical of those times. This portrays an image of an inhibiting environment much more typical of Victorian attitudes and standards. ...read more.

It ,then distances the friends from each other. "Neil's fist bunched in the sand." is a physical representation of his own frustration. In his interactions with Michael's mother, an element of humour is introduced as Neil puts all efforts into finding a valid excuse for not going swimming. "The fact is ...... I've got my period." This obviously echoes from his mother's range of excuses but amuses the family as he clearly fails to understand the term. Michael's mother, however, does not probe any further probably to save him any further embarrassment but maybe also because she has no interest in solving his problem. Michael's sister was obviously quite keen for him to join in the fun at the beach but she too loses interest in him when he refuses to participate in the fun. Neil is probably quite used to feeling treated in this way and also quite adept at hiding any feelings of self-pity, anger, embarrassment and loneliness. In fact, he may often prefer to be alone to save having to make excuses at all. Throughout the text, Neil's own views reflect those of his absent mother and he imagines what her comments would be in many situations: "If there is one thing I cannot abide it's a milk bottle on the table." ...read more.

She is unflinching when she examines his psoriasis and offers words of wisdom: "Watch that you don't suffer from more than the disease." He claims that he does not understand and she elaborates: "It's bad enough having it without being shy about it as well." This reaction is completely new to Neil and this conversation is a turning point in his life. He seems stronger and more mature after his conversations with her. When Michael suddenly approaches, he does not hurriedly cover up as he may well have done previously although there is obvious surprise and shock in Michael's voice on seeing the affected skin. Michael responds favourably as he appears to understand the reasons for Neil's behaviour. The pair are re-united in friendship which is demonstrated by their late night swim. Neil is able to take part in a regular boy experience for the first time - even if it is after dark. The short story therefore ends on a promising note. This boy who was so obviously troubled by his condition has been transformed and finds that through sharing his problem, he cements his friendships. Maybe he will find a popularity based on his own personality now rather than on his mother's ability to provide passes to the cinema. Neil's disease had consumed him and dictated his lifestyle. He seems to have learned that that did not have to be the case. Matthew Watson 3M2 ...read more.