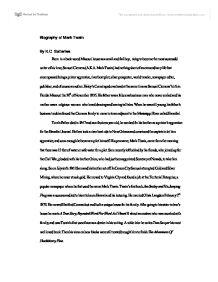 Biography of Mark Twain By K.C. Satterlee Born in a back wood Missouri house as a small and frail boy, rising to become the most successful writer of his time, Samuel Clemens (A.K.A. Mark Twain) had nothing short of an extraordinary life that encompassed being a printer apprentice, river boat pilot, silver prospector, world traveler, newspaper editor, publisher, and of course an author. Haley's Comet sped overhead at the same time as Samuel Clemens' birth in Florida Missouri the 30th of November 1835. His father was a failure as business man who never smiled and his mother was a religious women who loved dancing and hearing tall tales. ...read more.

Sam recently left behind by his friends, who joined up for the Civil War, pleaded with his brother Orion, who had just been appointed Secretary of Nevada, to take him along. So on July sixth 1861 Sam and his brother set off. In Carson City Samuel attempted Gold and Silver Mining, where he never struck gold. He moved to Virginia City and found a job at the Territorial Enterprise, a popular newspaper where he first used the name Mark Twain. Twain's first book Jim Smiley and His Jumping Frog was a success and led to his articles on Hawaii and his lecturing. He married Olivia Langdon February 2nd 1870. ...read more.

His later life was depressing but brought out his onward pushing life force. He ran into debt as he invested in many worthless, new inventions, so he was forced to tour where he could make much money quickly, but despised the lecturing. During that time his daughter died. Then his wife died and another daughter became delirious. But through all this he kept writing until the very end, though it was darker than his previous work. Mark Twain was a genius writer of the 19th century and left us with a treasure trove to examine. He once wrote "I am not an American, I am the American." This quote about sums up his writing life; he was able to flawlessly reproduce the American dialect while showing the regionalism that had become of America. ...read more.