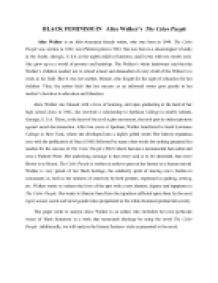 Ã¯Â»Â¿BLACK FEMINISM IN Alice Walkerâ€™s The Color Purple Alice Walker is an Afro-American female writer, who was born in 1944. The Color Purple was written in 1982, won Pulitzer prize in 1983. She was born in a sharecropperâ€™s family in the South, Georgia, U.S.A as the eighth child in Eatonton, small town with two streets only. She grew up in a world of poverty and hardship. The Walkerâ€™s white landowner said that the Walkerâ€™s children needed not to attend school and demanded of every child of the Walkerâ€™s to work in his field. But it was her mother, Minnie, who fought for the right of education for her children. Thus, the author feels that her success as an informed writer goes greatly to her motherâ€™s devotion to education and liberation. Alice Walker was blessed with a love of learning, and upon graduating at the head of her high school class in 1961, she received a scholarship to Spelman College in nearby Atlanta, Georgia, U.S.A. There, at the heart of the civil rights movement, she took part in student protests against racial discrimination. After two years at Spelman, Walker transferred to Sarah Lawrence College in New York, where she developed into a highly gifted writer. Her literary reputation rose with the publication of Once (1968) followed by many other works but nothing prepared her readers for the success of The Color Purple (1982) which became a monumental best-seller and won a Pulitzer Prize. Her underlying message is that every soul is to be cherished, that every flower is to bloom. The Color Purple is written in order to pass on her history as a human record. Walker is very proud of her black heritage, the solidarity spirit of sharing oneâ€™s burden in community as well as the richness of creativity by both genders, expressed in quilting, sewing, etc. Walker wants to redeem the lives of the past with a new identity, dignity and happiness in The Color Purple. ...read more.

Unlike Celie, Nettie uses a standard dialect. With Celie's opposition of the language of the mainstream (Standard English) and using her own dialect, Walker represents the political and economic plight if the society that deprives women of education and power as it is for Celie in the rural community in Georgia. While struggling to search of self, the characters present their womanist behaviours. Walker presents characters who know more about their history and roots. They also love their people, their community and their self. Racial oppression has a psychological impact on men and results in domestic violence which leads to suffering of characters like Celie, Nettie, and even Sofia racially and s******y. Alphonso and Albert beat and abuse Celie, she opposes none as she wants to survive. Shug and Sofia are characters of masculine deeds and feminine charms. Eliot Evans takes Shug to be, "embodiments of feminist existential freedom"(Butler, E. E., 1989) as Shug frees Celie from oppression and sexism of her husband They develop a lesbian relationship as part of their womanist behaviour. Sofia also shows her womanist behaviour as she opposes her husband, Harpo and takes the hold of her home. She comes out of the house for economic freedom yet she loves her community, people and family which indicates her womanist behaviour. Walker in Coming Apart talks of a womanist as an African-American heterosexual woman willing to utilize wisdom from African-American lesbians about how to improve s****l relationships and avoid being s******y objectified. Therefore, heterosexism and lesbian relationship according to Walker is seen as a way to define black feminist's sexuality. Additionally, Alice Walker defines a womanist as, "A woman who loves other women s******y and/or nonsexually"(Walker, A., 1983). This definition indicates that a womanist may be a lesbian or a heterosexual. The major characters, Celie and Shug Avery are women who love each other s******y as well as nonsexually. Through the hands of Alphonso and Albert, Celie is abused but in a s****t situation, she remains calm and quiet for survival. ...read more.

After Shug explains to Celie that God only wants to be admired for all of the beauty and magnificence He created, she says, "I think it [angers] God if you walk by the color purple in a field somewhere and don't notice it." The author uses purple to represent both the physical grandeur of the world and also the impressive internal and external traits that define each individual. To Celie, needles are a means to create something worthwhile by uniting items that on their own are insignificant. Because they take parts and give them meaning by making a whole, they are a positive force in her life. Needles are used to sewing pants, which lead to Celie's success as a seamstress and a business entrepreneur. Razors, in contrast, represent destruction. When Celie is blinded by her hatred for Mr. ___ because of his abuse, subjugation, and most importantly, because of his purposeful theft of Nettie's letters, she almost kills him with his own razor. The razor becomes the means to rid her life of her oppressor, but the act of violence for which she considers using it would eliminate all the strides she has made toward independence. To conclude, The Color Purple has employed the use of letterform technique and satire. Satire, as seen, is mainly towards men who cling to patriarchal stances, yet at times contradict themselves or are humiliated by occurrences that prove their stances wrong. Albert and Harpo in the former work come out as diehard male oppressors yet, when their women separate from them, such men are the first to be afflicted by psychological trauma. When their wives leave them, they are mentally deeply troubled, yet as members of the so-called perfect and tough gender, they have always behaved as if matters related to love do not touch the surface of their hearts let alone the core. Women emancipation has been achieved in the end. In a nutshell, Alice Walker has attempted to embody her own particular vision of black feminism in a work that transcends ideology. ...read more.