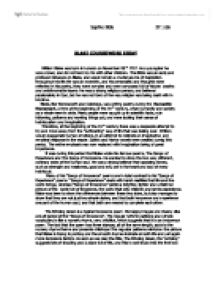 BLAKE COURSEWORK ESSAY William Blake was born in London on November 28th 1757. As a youngster he was a loner, and did

Sophie Bibb 27.1.06 BLAKE COURSEWORK ESSAY William Blake was born in London on November 28th 1757. As a youngster he was a loner, and did not tend to mix with other children. The Bible was an early and profound influence on Blake, and would remain a crucial source of inspiration throughout his life.He was an eccentric, and his personality and thoughts were reflected in his poetry, they were complex and were composed full of hidden depths and unfathromable layers. He was a strong religious person, and believed passionately in God, but he was not fond of the way religion was being dealt with in his time. Blake, like Wordsworth and Coleridge, was writing poetry during the Romantic Movement, a time at the beginning of the 19th century, when humanity and society as a whole were in crisis. Many people were caught up in scientific facts, rule following, patterns and working things out, and were lacking their sense of individualism and imagination. Therefore, at the beginning of the 19th century there was a desperate attempt to try and move away from the "suffocating" way of life that was taking over. Writers would exaggerate human emotions, in an attempt to rekindle an imaginative and emotinal response in the reader. Gothic and Horror novels were created durnig this period. The entire emphasis was now replaced with imagination being of great importance. It was during this period that Blake wrote his famous poems, The Songs of Experience and The Songs of Innocence. ...read more.

They are comfortable in their surroundings. However, there is a definite change in the last two lines - "And sport no more seen on the darkening green". The word "echoing" gets replaced with a negative word "darkening", signifying that night is closing in. This could have a wider meaning however, old ages and all good things coming to an end. It shows an end of an era and the end of life and is a hint at a darker atmosphere, which becomes very apparent in the experience poems. The Echoing Green's "partner poem" is The Garden of Love. Like other "Songs of Experience" poems, the poem deals with the repression of joys, desires and instincts by the church and it's prohibitive morality. The speaker, presumably no longer a child, returns to the 'Garden of Love' , and sees the earlier pastoral and natural vision of love transformed by the influence of the church and by "priests in black gowns". The language of the poem is simple, but the symbolism is so compressed and complex that every word is vital in enforcing the poet's sense of outrage at the unhealthy effects which the church has produced in society. By reading the title of the poem, unlike the 'Echoing Green', where it was clear that it was an innocence poem, we are unsure whether 'The Garden of Love' is actually an innocence or experience poem. The poem begins with "I went to the Garden of Love". The personal pronouns here suggest isolation and loneliness. ...read more.

Blake's intentions in both the Songs of Experience and Songs of Innocence can be seen clearly in the pair of poems. He has succeded to show the two very different, contrary sides of the human soul in both a poignant and effective way. Every single word in both poems has so many different meanings, and what is special about Blake's poetry is that, depending on the life experience of the reader, different people see his poems in different ways. 'The Echoing Green' shows a clear portrait of innocent life, happy memories and laughter. 'The Garden of Love' portrays adult life in such a way that it seems almost unreal. Although the setting is exactly the same, both poems portray such a different outlook on life. 'The Echoing Green' is my favourite poem, because it portrays childhood in such a heavenly way. Even though it is typical of an innocence poem to see everything in a positive way, the way Blake wrote it made me remember back to when I was younger. Throughout the poem you have a constant reminder of how wonderful life can be, and it almost makes me miss the innocent way of life. The way that Blake uses so many wonderful images and meanings in such a short poem is one quality that not many poems carry succesfully, which, in my opinion, makes the poem even more unique. I also found it intrigueing that such a simple poem can mean so many different things to so many different people, a quality I have never seen in a poem before. ...read more.