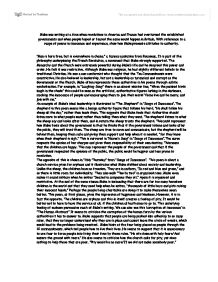 Blake was writing at a time when revolutions in America and France had overturned the established governments and when people hoped or feared the same would happen in Britain. With reference to a range of poems in innocence and experience, show how Blake

Blake was writing at a time when revolutions in America and France had overturned the established governments and when people hoped or feared the same would happen in Britain. With reference to a range of poems in innocence and experience, show how Blake presents attitudes to authority. "Man is born free, but is everywhere in chains," a famous quotation from Rousseau. It is part of the philosophy underpinning the French Revolution, a movement that Blake strongly supported. The Monarchy and the Church were extremely powerful during Blake's life and he despised this power and order. He felt it was restrictive. Although Blake was religious, he had slightly different beliefs to the traditional Christian. He was a non-conformist who thought that the Ten Commandments were constrictive. He also believed in leadership, but not a leadership as tyrannical and corrupt as the Government or the Church. Blake often represents these authorities in his poems through subtle symbolisation. For example, in "Laughing Song" there is an almost sinister line, "When the painted birds laugh in the shade" this could be seen as the artificial, authoritative figures lurking in the darkness, mocking the innocence of people and encouraging them to join their world "Come live and be merry, and join with me," An example of Blake's ideal leadership is illustrated in "The Shepherd" in "Songs of Innocence". ...read more.

Blake hints at the fear being placed on people through the 10 commandments, which tell people how to live their lives. He seems to suggest that it is unnecessary to use fear to force people into living their lives by these rules. "He sits down with holy fears/And waters the ground with tears." He also seems to criticise how the church calls for pity, yet does nothing to help those that are poor, "Pity would be no more/If we did not make somebody poor." The corruption of the city is represented by mystery, which leads to the decay of trust in authorities, "Soon spreads the dismal shade/Of Mystery over his head/And the Caterpillar and Fly/Feed on the Mystery." Another poem illustrating Blake's ideas about the effect of man on nature is "London" from "Song of Experience". Blake is implying that men have tried to control nature when he describes the Thames as being "Chartered" which creates an idea of it being man made. Like a lot of his poems, Blake has written in a very negative way showing his dislike of man's power. Blake wrote this poem in first person narrative making it very real and personal. ...read more.

It shows a nurse who finds in her charges merely the expression of a potential freedom she cannot bear to contemplate, and which she must repress at all costs, "Your spring and your day are wasted in play," We seem a similar claim in "The Little Vagabond". Here Blake seems to be speaking out against the church authorities. He is suggesting that their lack of compassion drives people away and in order to encourage more people to attend church they should provide a warmer atmosphere, which encourages happiness and forgiveness. It also seems to criticise the Christian faith for its ambiguity. Blake questions why God does not forgive the Devil when the bible preaches forgiveness. Although Blake was rejected by his contemporaries, after his death his work has become extremely popular and well known. It interprets life in a way not known before Blake's time, and has inspired many artists and writers. Although he may not have known it, Blake achieved a lot during his lifetime despite what many people said about him. His poems continue to have an effect on people, and the ideas and beliefs behind them still have meaning today. ...read more.