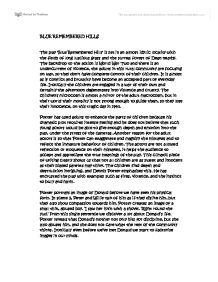 BLUE REMEMBERED HILLS The play 'Blue Remembered Hills' is set in an almost idyllic locality with the fields of long luscious grass and the surreal forest of Dean nearby. The backdrop to the action is World War Two and there is an undercurrent of violence, the adults in this rural community are focusing on war, so they don't have complete control of their children. It is almost as if conflict and brutality have become an accepted part of everyday life. Ironically the children are engaged in a war of their own and certainly the afternoon degenerates into violence and cruelty. The children's microcosm is almost a mirror of the adult macrocosm, but in their world their morality is not strong enough to guide them, so they lose their innocence, on this tragic day in 1943. Potter has used adults to enhance the parts of children because his dramatic plot requires intense feeling and he does not believe that such young actors would be able to give enough depth and emotion into the play, under the stress of the cameras. Another reason for the adult actors is so that Potter can exaggerate and magnify the mistakes and to reflect the immature behaviour of children. ...read more.

This is a visual image as how Donald is a withdrawn and insecure character within the play. This is only a short scene, but one of the most powerful and distressing in the play. This is the first sign that Donald is at the beginning of a mental breakdown. Donald doesn't appear again until scene 13. He has remained in the barn since Audrey and Angela's bullying towards him. This scene clearly shows that Donald is a lot less confident around Peter than he was around the girls at the beginning of scene 5. When Peter initially enters the barn he does not realise that Donald is hiding behind a wooden support beam. Donald coughs nervously to attract Peter's attention. At the beginning of the scene Donald shows submissive body language and he stutters slightly while he tries to talk to Peter. The two begin to talk about the fight that just happened between Peter and Willie. Donald appears to be extremely cowardly and the stage directions repeatedly say 'gulping' or 'he swallows'. By doing this Potter is controlling the audiences' feelings and how they react to Donald. During the scene the topics quickly swop and change around. ...read more.

Willie we was all together Angela Miles away! The children lie to each other and themselves, they even begin to make up an alibi. This shocks the audience as it is an adult reaction to the situation, we do not expect children to act in this way. It shows the children have lost their childhood innocence and they will never get away from this day, they are mentally scarred. However the children do realise what they have done and they eventually begin 'to cry overwhelmed,' and the play ends on a very sombre note, with Dennis Potter reading a poem written by A. E. Houseman. The poem represents what the children have lost, and not just youth but all that is associated with youth. it kills the idealism and naivet� of youth. It is this naivet� and youth which can appreciate the countryside for what it is, and does not question perception of it. This naivet� of youth is now a 'lost' land, implying that age is malcontent and yearning. We are no longer able to behold that 'land' with candour, but instead must merely accept that we can no longer return there. Youth has passed, innocence is replaced with cynicism. By reading the poem himself it and the play summarise, for me, the moral Potter has hidden in the play, that 'our culture has long since acknowledged that childhood is not transparent with innocence.' ...read more.