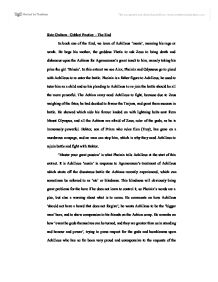 Book one of the Iliad - short summary

Kate Graham - Gobbet Practice - The Iliad In book one of the Iliad, we learn of Achilleus 'menis', meaning his rage or wrath. He begs his mother, the goddess Thetis to ask Zeus to bring death and dishonour upon the Achians for Agamemnon's great insult to him, namely taking his prize the girl 'Briseis'. In this extract we see Aiax, Phoinix and Odysseus go to plead with Achilleus to re-enter the battle. Phoinix is a father figure to Achilleus, he used to tutor him as a child and so his pleading to Achilleus to re-join the battle should be all the more powerful. The Achian army need Achilleus to fight, because due to Zeus weighing of the fates, he had decided to favour the Trojans, and grant them success in battle. He showed which side his favour landed on with lightning bolts sent from Mount Olympus, and all the Achians are afraid of Zeus, ruler of the gods, as he is immensely powerful. Hektor, son of Priam who rules Ilios (Troy), has gone on a murderous rampage, and no man can stop him, which is why they need Achilleus to rejoin battle and fight with Hektor. ...read more.

Surely, if the gods can forgive such an error as Agamemnon made, Achilleus should also be able to do it? The story about 'the Repents' tries to turn Achilleus round to Phoinix's way of thinking. The story is about how Folly runs ahead of them, wreaking havoc upon mortal men, and those who kindly receive 'the Repents' afterward are looked upon favourably as 'the Repents' are daughters of Zeus and have the ability to heal the damage done by Folly. This is obviously an analogy for their current situation. The 'Folly' in this case was the actions of Agamemnon, in unjustly taking Achilleus prize as his own, and 'the Repents' are the three men come to plead with Achilleus to take up his sword and rejoin the ranks of the Achian army. It is a subtle way of telling Achilleus that if he does 'show respect as the daughters of Zeus approach' he will 'pay with his own hurt'. This is a powerful example which Achilleus should not ignore. ...read more.

Agamemnon has realised his blindness, or 'ate', in taking Achilleus prize in the first book. He is sorry for his action, but not because it is unjust, simply because Achilleus is no longer fighting and they are losing the battle due to Hektor's fighting skill. This is the reason he sends the three men to beg Achilleus to come back to them, and attempts to buy Achilleus with a long list of gifts. Achilleus senses he is not truly sorry and refuses to come back. This has serious consequences for Achilleus. He will not amalgamate with the Achian army, and so will later have to pay with the life of his best friend, Patroklos, in order to get him to finally enter battle. This is what brings his own folly to and end, and when he steps onto the battle field again, the Achians start to win, and he kills Hektor, leaving Priam's city nearly fallen. We do not see the actual sacking of Ilios in the Iliad, but it is inferred that this will happen soon after Hektor's death, as will Achilleus' own death. His refusal to battle in book nine has cost him his dearest friend, and ultimately his own life. ...read more.