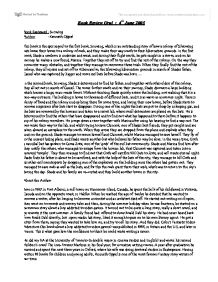 Book Review Oral : 4th June 2003 Book Reviewed : Sunwing Author : Kenneth Oppel This book is the epic sequel to the first book, Sunwing, which is an outstanding story of how a colony of Silverwing bats loose their home to a colony of owls, and they make their way south to their hibernation grounds. In the first book, Shade a newborn is undersize and weak, and during their flight south, he gets caught in a storm, and on his journey he makes a new friend, Marina. Together they set off to try and find the rest of the colony. On the way they encounter many obstacles, and together they manage to overcome those trials. When they finally find the rest of the colony, they all rejoice and set off to Hibernaculm, the Silverwing hibernation grounds in search of Shades father, Cassiel who was captured by bigger and more evil bats before Shade was born.... ...read more.

The two make their way to the lab, and whilst trying to save Chinook, one of Shades best friends, they get caught and are taken aboard an aeroplane to the south. When they arrive they are dropped from the plane and explode when they land on the ground. Shade manages to rescue himself and Chinook, whilst Marina managed to save herself. They fly of to the nearest hiding place, and Shade meets another bat who believes his father may be alive. In the mean time, Goth a cannibal bat has spoken to Cama Zotz, one of the 'gods' of the evil bat community. Shade and Marina find him after they notify the others, who managed to escape from the human lab, that Chinook was captured and taken into a pyramid 'temple'. They then manage to find out that Goth will sacrifice 100 bats to Zotz, and will create eternal night. Shade finds his father is about to be sacrificed, and with the help of the bats of the city, they manage to kill Goth and his other evil counterparts by dropping one of the explosives on the building once the others had gotten out. ...read more.

A family friend had offered to show Roald Dahl his story. He had never heard back from Roald Dahl directly, but upon readin hid story, liked it enough to pass on to his own literary agent. He got a letter from them, saying they wanted to take him on, and try to sell his story. And they did. Colin's Fantastic Video Adventure (his book about a boy addicted to video games) was published in 1985, in Britain and the U.S, and later in France. This is what gave him the confidence to think he could make writing a career. He did my BA at the University of Toronto (a double major in cinema studies and English) and wrote his second children's novel The Live-Forever Machine in his final year, for a creative writing course. A year after graduation he married and spent the next three years in Oxford, where his wife was doing doctoral studies in Shakespeare. Having written 18 books for children and young adults, Kenneth Oppel is one of the most famous Fantasy story writers of our time. ...read more.