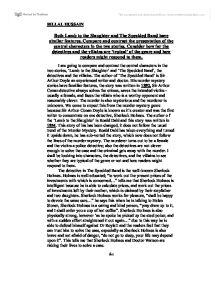 Both Lamb to the Slaughter and The Speckled Band havesimilar features. Compare and contrast the presentation of the centralcharacters in the two stories. Consider how far the detectives and thevillains are 'typical' of the genre and how read...

Both Lamb to the Slaughter and The Speckled Band have similar features. Compare and contrast the presentation of the central characters in the two stories. Consider how far the detectives and the villains are 'typical' of the genre and how readers might respond to them. I am going to compare and contrast the central characters in the two stories, 'Lamb to the Slaughter' and 'The Speckled Band', the detectives and the villains. The author of 'The Speckled Band' is Sir Arthur Doyle an experienced writer and doctor. His murder mystery stories have familiar features, the story was written in 1892. Sir Arthur Conan detective always solves the crimes, saves the intended victim-usually a female, and faces the villain who is a worthy opponent and reasonably clever. The murder is also mysterious and the murderer is unknown. We come to expect this from the murder mystery genre because Sir Arthur Conan Doyle is known as it's creator and was the first writer to concentrate on one detective, Sherlock Holmes. The author of the 'Lamb to the Slaughter' is Roald Dahl and this story was written in 1954. This story of his has been changed, it does not follow the usual trend of the Murder Mystery. ...read more.

The detectives are not really sure what the murder weapon is and who the murderer is, "probably right under our very noses" they are looking for the obvious, the man and weapon. The detectives have stereotypical views because "get the weapon and you've got the man" tells me that they think a female cannot commit a crime and that men are the villains in the criminal world. In the 1950's when the story was written women were expected to be weak, defenceless housewives who could not commit a crime. We are unsure that they will solve the crime. The detectives are made to look foolish with direct speech, "probably right under our very noses". The detectives are outsiders in this story, which is because the story mainly concentrates on the villain Mrs Maloney rather than the detectives. The detectives are easily taken in; this is because Mrs Maloney manipulates them, by giving them food and drink, "why don't you eat up that lamb that's in the oven?" This tells me that she cunningly offers them the murder weapon to eat. The detectives are not typical of the genre because they do everything that a detective is not supposed to do on the job, e.g., drinking, eating, comfort the murderer, and more, they don't solve the case. ...read more.

Mr Maloney, partly because we know that he was leaving her and he didn't want a fuss that would jeopardise his career. Mrs Maloney then starts like one by covering her tracks, ' both the smile and the voice were coming out better now. She rehearsed it several times'. It is ironic that Mr Maloney was killed by his dinner, which he refused to eat. Which is humour and entertainment killed Mr Maloney. The Speckled Band is very typical of the genre because of the characters in the story, Shelock Holmes is very typical detective, and Dr Roylett is also Typical of the genre. The plot of the story is also typical because the detective solves the case, and the criminal is killed by his own murder weapon. While in Lamb to the Slaughter the story and characters are not typical of the genre, the author of Lamb to the Slaughter, Roald Dahl subverts the murder mystery genre. The characters in this story are unusual, partly because they are not typical. Mrs Maloney turns out to be the murderer, while her husband Mr Maloney, turns out to be the victim and the detectives turn out to be an insult to the name of detective. BILLAL HUSSAIN -1 - ...read more.