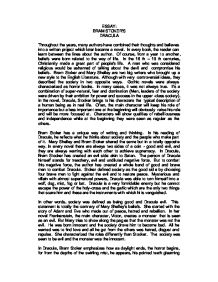 ESSAY: BRAM STOKER'S DRACULA Throughout the years, many authors have combined their thoughts and believes into a written project which later became a novel. In every book, the reader can learn between the lines about the author. Of course, from a year to another, beliefs were born related to the way of life. In the 18 th - 19 th centuries, Christianity made a great part of people's life. A man who was considered religious would be ashamed of talking about the devil and compromise his beliefs. Bram Stoker and Mary Shelley are two big writers who brought up a new style to the English Literature. Although with very controversial ideas, they described the society in two opposite ways. Gothic novels were always characterized as horror books. In many cases, it was not always true. It's a combination of super-natural, fear and domination (Men, leaders of the society were driven by their ambition for power and success in the upper-class society). ...read more.

In other words, society was defined as being good and Dracula evil. This statement is totally the contrary of Mary Shelley's beliefs. She started with the story of Adam and Eve who made out of peace, hatred and rebellion. In her novel Frankenstein, the main character, Victor, creates a monster that is seen as an evil. But Mary tries to show along the pages that the monster was not the evil. He was born innocent and the society drove him to become bad. All he wanted was to find love and all he got from the others was hatred, disgust and repulse. She characterized the roles differently than Stocker. The society was seen to be evil and the monster was the innocent. In Dracula, Bram Stoker emphasizes how as daylight ends, the horror begins, for from the depths of the swirling mist, he appears, his pointed teeth gleaming as he edges towards his victims. ...read more.

The creature was brought into the world innocent and with good intentions. He was then left on his own, when he seeked refuge in the forest he found a family and tried to help them. In response, when they first saw him they were terrified and attacked him, a similar event occurred in a village near by later on. After he swore to never get close to humans again but he sees a young girl drowning, he saves her, but when the father gets to the scene, he gets the wrong idea and shoots the creature. And it's only then that he becomes bad. In her novel, Shelly tries to illustrate that society has also a bad side and sometimes it is not as civilized as it claims to be. None of these ideas can be found in Dracula, on the contrary, the society is a positive symbol and everything that is bad is out of it like Dracula's castle which is isolated, Dracula himself seen as the enemy of the society. ...read more.