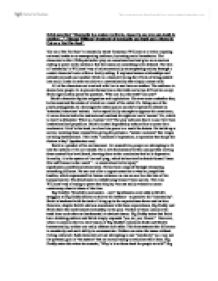 Brick says that 'Mendacity is a system we live in. Liquor is one way out, death is another...'. Discuss Williams' treatment of mendacity and truth and a theme in Cat on a Hot Tin Roof'.

Brick says that "Mendacity is a system we live in. Liquor is one way out, death is another...". Discuss Williams' treatment of mendacity and truth and a theme in Cat on a Hot Tin Roof'. 'Cat on a Hot Tin Roof' is essentially about Tennessee Williams as a writer exposing universal truths to an unsuspecting audience, by testing social boundaries. The characters in this 1950s patriarchal play are sensationalised and give us an unclear ending to prove to the audience that his issues are something to be debated. The idea of 'mendacity' is Williams' way of microcosmically encompassing society through a central character's role within a family setting. It explores human relationships and attitudes towards one another. Brick is a character facing the effects of being pushed into social limbo in order to achieve a conventionality that simply cannot exist. All of the characters are involved with lies in one form or another. The audience is shown how people lie to placate themselves as the truth can be too difficult to accept. Brick significantly poses the question, 'Who can face the truth? Can you?' Brick's character depicts resignation and capitulation. His own name embodies this; he has assumed the status of a brick as a result of his entire life. ...read more.

However, it displays Brick's mendacious attitude to himself. It raises the question as to whether he can face challenging his masculinity and "unnatural" h********l longings in this suppressive society. It challenges the reasoning as to whether he really is caught up in the system of mendacity by lying to the person who controls this disgust with the system - himself. Big Daddy realises this and accuses him: "This disgust and mendacity is disgust with yourself." In order to equal the score with his father he reveals Big Daddy's doom. This can be seen as an act of truth out of mendacious disgust, as it his limits had been tested and he refused to be caught up in the system any further, or as simply as a malicious response to Big Daddy's insensitive frankness. "Brick is trapped in a morality of purity that he cannot live up to...(an) extremely limited definition of masculinity" (G. Berkowitz, 1992). This changes the dynamics of the play as the two inadmissible issues are finally acknowledged, leaving it fiercely tense at the end of the Act, as the audience anticipates how the family will feel the brunt of Big Daddy's wrath at this revelation. ...read more.

It induces pity and the audience can see how Brick is similar to both his parents - he deludes himself about Skipper yet is as forthright as Big Daddy, displaying the contrast as to why Gooper is much disliked; Gooper is facetious, well-educated and possesses social graces. Big Daddy mutters to himself "wouldn't that be funny if it were true" after Big Mama professes her love to him, mirroring the scene between Maggie and Brick at the end. It demonstrates how these two women yearn for conventionality but their husbands can see right through them and only Brick has had the courage to shun his wife until now when Big Daddy illuminates his insensitivity by casting of his wife, appearing as ungrateful. Consequently, through this dynamic play Williams has reflected society in which he lived and although the play has developed with age, the fundamental flaws remain; people will use mendacity to achieve conventionality. Lies, small or large are easier to uphold rather than facing the frightening truth. They are seduced by the theory of perfection. He recognises how mendacity affects each one of us and is able to unfold several series of lies and webs of deceit in just one evening, exposing how we are all victims of our own hidden desires. By Mariella de Souza. 12EAS. ...read more.