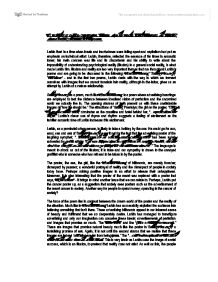 By referring to at least two poems, discuss by what means Larkin illustrates the disparity between reality and illusion in his poems.

By referring to at least two poems, discuss by what means Larkin illustrates the disparity between reality and illusion in his poems. Larkin lived in a time when ideals and touchstones were falling apart and capitalism had put an emphasis on individual effort. Larkin, therefore, reflected the essence of his times in sarcastic tones; his main concern was life and its discontents and his ability to write about the impossibility of understanding psychological reality (illusion) in a general social reality, is what made Larkin him. Illusion and reality are two very important themes that run throughout Larkin's poems and are going to be discussed in the following; 'Essential Beauty,' 'Sunny Prestatyn,' 'Wild Oats' - and in the first two poems, Larkin deals with the way in which we torment ourselves with images that we cannot translate into reality, although in the latter, gives us an attempt by Larkin at a mature relationship. Sunny Prestatyn is a poem, much like Essential Beauty, is a poem where advertising hoardings are employed to test the distance between idealised vision of perfection and the uncombed world we actually live in. ...read more.

The force of the poem lies in contrast between the dream world of the poster and the reality of the situation. Much like in 'Essential Beauty' Larkin has successfully exploited the audience into believing something that isn't there. These advertising billboards appeal to our inherent sense of beauty and fulfilment that we so desperately desire. Larkin has managed to transfigure advertising and only our imagination can conceive these ideals; advertisements of perfection and images that promise so much. The "silver knife" and the "glass of milk in a meadow." These are images that promise natural beauty much like the poster in 'Sunny Prestatyn;' a tantalising promise of sex. Again, it is not until the second stanza that we realise that these images are indeed 'cold' and are far from being 'pure.' The "...dark raftered pubs/Are filled with white-clothed ones form the tennis-clubs." This is very ironic as Larkin uses the image of social success, which is an illusion, to pretend that reality does not exist. As well as this, the people from the tennis-clubs are wearing white, much like the virginal purity of the girl in 'Sunny Prestatyn;' however, the idea of the perfect place is then ...read more.

Larkin has become engaged to her, but he hasn't his heart in it. The beauty of the 'Bosomy Rose' is unattainable; the 'Rose' never becomes flesh or blood; instead Larkin is left with the less attractive girl, like Larkin belongs to the ordinary world and exists in a routine reality. This dull courtship becomes habit, as 'letters, gifts and routine meetings' are a result of Larkin's sudden parting and there is no doubt that 'Wild Oats' offers a glimpse into a humiliating passage of the poet's youth. So successfully does he pass off formal control as loose conversation, that one doesn't even notice the rhymes at first. Once again, the sting in the tail becomes apparent in Larkin's poems. Just like the previous two poems the last few lines. Whether seen in the flesh or on the photograph, we realise that her charms are indeed 'Unlucky.' In conclusion, the reader realises that Larkin illustrates illusion and reality in many different ways and it is obvious that, in the three poems studied, that unattainable desires is something that separates this illusion form reality; where Larkin has been forced over to the reality side of things, to the real world of discontentment. James Kennedy L6 D ...read more.