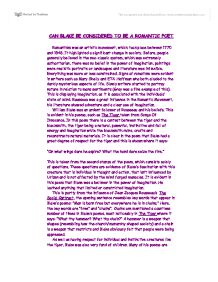 Can Blake Be Considered To Be a Romantic Poet.

CAN BLAKE BE CONSIDERED TO BE A ROMANTIC POET Romantism was an artistic movement, which took place between 1770 and 1848. It highlighted a significant change in society. Before, people generally believed in the neo-classic system, which was extremely authoritarian, there was no belief in the power of imagination, paintings were realistic portraits or landscapes and literature was inflexible. Everything was more or less constrained. Signs of romatism were evident in writers such as Mary Shelly and ETA Hoffman who both alluded to the darkly mysterious aspects of life. Slowly writers started to portray nature in relation to mans sentiments (Gray was a fine example of this). This is displaying imagination, as it is associated with the individuals' state of mind. Rousseau was a great influence in the Romantic Movement, his literature showed adventure and a clear use of imagination. William Blake was an ardent follower of Rousseau and his beliefs. ...read more.

Here, the key words are "free" and "chains". Chains are mentioned a countless number of times in Blake's poems, most noticeably in The Tiger where it says: "What thy hammer? What thy chain?" A hammer is a weapon that shapes (resembling how the church/monarchy shaped society) and a chain is a weapon that restricts and Blake obviously felt that people were being oppressed. As well as having respect for individual and instinctive creatures like the tiger, Blake was also very fond of children. Many of his poems are based on children with a particular emphasis on childhood memories, for example: The Chimney Sweeper and The Nurses Song. Both of these poems appear in two parts, each with one in Songs of Innocence and the other in Songs of Experience. This emphasises the value of individual experience. If we look at The Nurses Song (Innocence), it is clearly portraying a feeling of joy and optimism; this is evident where it says: "When the voices of children are heard on the green And laughing is heard on the hill." ...read more.

The other factor is childhood, he is emphasising the sacredness and vitality of that part of life. As this is the only time when we can be completely frank and voice our thoughts without hesitation and its accepted. By analysing Blake's poetry and imagery it is clear to see that he can be considered a romantic poet. It is clear to see in The Tiger that he believes in the power of imagination and this is also evident in all his work. He emphasises on the value of experience a great amount and this is most obviously shown by the composition of Songs of Experience. All his work shows a subjective point of view, which is expressed through the intensity of the language he uses. He has linked together man and nature (most noticeably) in The Sick Rose and The Clod and the Pebble. All his work reflects his state of mind, he is conveying his point of view through his literature and art forms, and this makes him a romantic poet. ...read more.