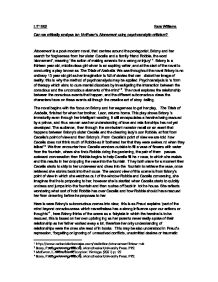 LIT1002 Sara Williams Can we critically analyse Ian McEwan's Atonement using psychoanalytic criticism? Atonement is a post-modern novel, that centres around the protagonist, Briony and her search for forgiveness from her sister Cecelia and a family friend Robbie, the word 'atonement', meaning 'the action of making amends for a wrong or injury'1. Briony is a thirteen year old, middle class girl whom is an aspiring writer, and at the start of the novel is conducting a play known as The Trials of Arabella. We see throughout the novel Briony is no ordinary 13 year old girl as her imagination is full of stories that can distort her image of reality; this is why the method of psychoanalysis may be applied. Psychoanalysis is 'a form of therapy which aims to cure mental disorders by investigating the interaction between the conscious and the unconscious elements of the mind'2. The novel explores the relationship between the conscious events that happen, and the different subconscious views the characters have on these events all though the creative act of story-telling. The novel begins with the focus on Briony and her eagerness to get her play, The Trials of Arabella, finished for when her brother, Leon, returns home. This play shows Briony's immaturity even through her intelligent wording, it still encapsulates a heroine being rescued by a prince, and thus we can see her understanding of love and relationships has not yet developed. ...read more.

Displacement is 'one person or event is replace by another which is in some way linked or associated with it, perhaps because of a similar sounding word or by some form of symbolic substitution'9. We are told that in his bedroom Robbie has 'various photographs ; the cast of Twelfth Night on the college lawn, himself as Malvolio'10 Malvolio is known in the play as deluded to think he can have a chance with his employer Olivia, Robbie could have displaced this play to his own situation. The use of the fountain could be describe by Freud in terms of association in which an object can be associated with certain feelings'11, so in this case the fountain symbolizing the love between Cecelia and Robbie. 'The use of an Italianate fountain as the site for an apparently trivial moment in the lovers' story may contain an allusion to the Italian fountain in Evelyn Waugh's Brideshead Revisited. If this is so, it would be another ironic reversal because the country house that gives title to Waugh's novel is the ideological, aesthetic, and emotional center of the novel'12. Also 13He is also quick to note ' What might Freud say? How about : she hid the unconscious desire to expose herself to him behind a show of temper'14, this invites the reader to start top think of the novel in a Freudian way, are the actions we read about what they seem? ...read more.

Towards the end of the novel we realize how it is Briony who has wrote this whole story out of guilt and repentance. Instead of her leading a life at Cambridge, in which she was intended she follows the footsteps of her sister and becomes a nurse. Freud could interpret this as sublimation, which is 'the transforming of an unacceptable impulse, whether it be s*x, anger, fear, or whatever, into a socially acceptable, even productive form' in this case Briony's feeling of regret subconsciously lead her to becoming a nurse. Here she helps out a French soldier who has been wounded and it is here "she learned a simple, obvious thing she had always known, and everyone knew: that a person is, among all else, a material thing, easily torn, not easily mended"24 realizing that when she was younger she was 'brought up on a diet of imaginative literature, she was too young to understand the dangers that can ensue from modeling one's conduct on such an artificial world'25. Briony now realizes everything she did in the past she looked on with what Freud calls projection 'negative aspects of ourselves are not recognized as ourselves', at the time she sent Robbie to jail she did not realize she did it out of sub conscious feelings jealousy and spite of her sister, she was determined the figure she saw was Robbie, therefore attempting to use fiction to correct the errors that fiction caused her to commit. ...read more.