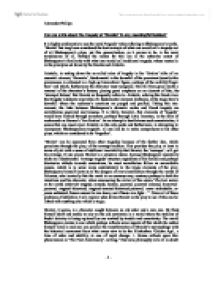 Can we write about the tragedy of 'Hamlet' in any meaningful fashion? It is highly problematic to use the word 'tragedy' when referring to Shakespeare's works. 'Hamlet' has long been considered the best example of what one would call a tragedy out of all Shakespeare's plays, yet this generalisation, as it proves to be, is the most troublesome of all. Perhaps the reason for this lies in the unknown extent of Shakespeare's familiarity with what one would call traditional tragedy, whose routes lie in the principles set down by the Greeks and Aristotle. Aristotle, in setting down the so-called rules of tragedy in his 'Poetics' talks of an essential element; 'Hamartia', fundamental in the downfall of the prominent (usually this prominence is reflected in a high up hierarchical figure, perhaps of the nobility)'tragic hero' and which, furthermore the character must recognise. This fall from grace marks a reversal of the character's fortune, placing great emphasis on an element of fate; the 'strumpet fortune' that Hamlet so frequently refers to. Aristotle, echoing the Greek view that tragedy is didactic also talks of a fundamental element, Catharsis, at the tragic hero's downfall where the audience's emotions are purged and purified. Taking this into account, the links between Shakespeare's dramatic works and Greek tragedy are nevertheless unproved and tenuous. It is likely, however, that elements of 'tragedy' would have filtered through somehow, perhaps through Latin literature, in the form of works such as Horace's 'Ars Poetica'. In an attempt to best balance such uncertainties, it seems that one must reject Aristotle as the only guide and furthermore, in attempting to incorporate 'Shakespearean tragedy', all one can do is make comparisons to his other plays, which are considered to be 'tragedies'. 'Hamlet' can be separated from other tragedies because of the further idea, which percolates through the play, of the revenge tradition. This provides the play, at least in terms of plot with a sense of additional inevitability that Hamlet, the 'revenger', will get his revenge. ...read more.

His militaristic father (even his father's ghost wears military attire) represents all the things he views as lacking in himself; strength, nobleness, swiftness of action and stability, hence his frequent comparisons, "but no more like my father than I to Hercules." This distinction echoes the Rennaissance view of men as separable into two character-types, men of action and conversely men who are passive. Indeed when he says, "O villain, villain, smiling damned villain! My tables..." there is an evident paradox where he immediately recognises his colourful use of language in the ironic announcement of his changed self; Shakespeare implying that Hamlet is defined by his scholarly character, and perhaps is unsuited fundamentally to the role he must play. The tendency to delay, which many people unwittingly refer to as Hamlet's tragic flaw is rather unconvincing. Hamlet frequently shows recognition of what he views to be a flaw in his character and for this reason people perhaps assume that this is his tragic flaw. One must question, however, the extent to which he truly delays, whether his descriptions of himself as 'gutless' are fair; and in doing so it appears that the flaw is merely a product of Hamlet's own abusive self-analysis, perhaps as much a figment of his imagination as he fears his meeting with the ghost might have been. Hamlet makes the decision to act mad, in an attempt to deter the suspicions of the people surrounding him, particularly Claudius; "as I perchance hereafter shall think meet to put an antic disposition on". He takes further steps to remove suspicions and safeguard his plan by making Horatio swear not to hint at the truth, "at such time seeing me, never shall... by pronouncing of some doubtful phrase as 'Well, we know'... this do swear." In making the decision to put his love for Orphelia aside, so that he can focus upon the task of revenging his father's murder he shows further decisiveness in making what is understandably a difficult choice. ...read more.

to the profoundest pit", is a marked contrast to Hamlet. The eventful clashing of these forces, in the form of a confused duel between Hamlet and Laertes, marks a purging of emotion and undeniable catharsis that is evidence of tragedy. Fortinbras has it in mind to take back his father's lost land as revenge for his own father's death and his decisiveness leads Hamlet to reflect that true greatness lies in this character trait; "readiness is all". Old Hamlet killed Old Fortinbras on the day Hamlet was born and this ushers in an important element of fate. It seems that the tragedy of 'Hamlet' lies in the fact that he is unfit for the task that circumstance and fate has provided him. It might be argued that he has a tragic flaw, yet it seems more accurate to refer to him in terms of a failed revenge figure than a tragic hero. The nature of the revenge figure, who has the duty to murder is extremely different from both Aristotelian and other Shakespearean versions of tragedy. In 'Hamlet', Shakespeare displays what Keats describes as "negative capability." He shows openness in his work. It is significantly not didactic in that there is no specific moral and thus the play is left open for the audience to interpret how they wish. Keats praised Shakespeare for the complexity and variation of his works and also for their 'suddenness', viewing his works to mark the birth of 'modern tragedy'. The uncertainty, which swamps almost every aspect of the play, is married to the idea of exploration and debate. Shakespeare's 'Hamlet', however, contradicts a great deal of the essential qualities, which define 'tragedy', and whist there is a structure it is very loose. For this reason, it seems, that one is merely playing with words when questioning the nature of tragedy in 'Hamlet', and furthermore that, in spite of the multitude of tragic elements punctuating the play, one must inevitably and controversially conclude that it is impossible to fit 'Hamlet' into the genre of Tragedy. ?? ?? ?? ?? Alexander Phillips - 1 - ...read more.