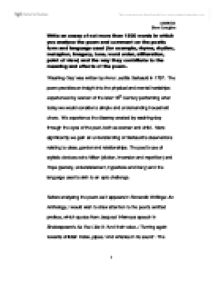 Carefully read the poem 'Washing Day' by Anna Laetitia Barbauld. Write an essay of not more than 1500 words in which you analyse the poem and comment on the poetic form and language used (for example rhyme, rhythm, metaphor, imagery, tone,word order, alli

Write an essay of not more than 1500 words in which you analyse the poem and comment on the poetic form and language used (for example, rhyme, rhythm, metaphor, imagery, tone, word order, alliteration, point of view) and the way they contribute to the meaning and effects of the poem.

‘Washing-Day’ was written by Anna Laetitia Barbauld in 1797.  The poem provides an insight into the physical and mental hardships experienced by women of the later 18th Century performing what today we would consider a simple and undemanding household chore.  We experience the disarray created by washing-day through the eyes of the poet, both as woman and child.  More significantly we gain an understanding of Barbauld’s observations relating to class, gender and relationships. The poet’s use of stylistic devices echo Milton (diction, inversion and repetition) and Pope (parody, understatement, hyperbole and irony) and the language used is akin to an epic challenge.

Before analysing the poem as it appears in Romantic Writings: An Anthology, I would wish to draw attention to the poet’s omitted preface, which quotes from Jacques’ infamous speech in Shakespeare’s As You Like It: ‘And their voice, / Turning again towards childish treble, pipes / And whistles in its sound’. The preface is useful to our appreciation of the poem, its parallels (small and great and dreams and reality) and the premise of the cyclical pattern of life.  This is a theme to which I shall return.

The poem is written in a mock heroic epic format following an uneven iambic pentameter, with no end of line rhyming scheme. Associated to blank verse this style was commonly used by Shakespeare to depict the speech of high standing members of society, including the aristocracy and royalty, in his plays. In selecting this same format in conjunction with her references to classical themes, ‘Muses’, ‘buskined’ and ‘Erebus’ and use of the archaic word ‘welkin’, Barbauld elevates mundane domesticity to a status more associated with the writings of Milton in  Paradise Lost.   Such references would not have been lost on her peers, readers or audience of the day.  However the poet’s ironic tone at the outset of the poem reduces the muses of classical literature into nothing more than gossiping women ‘in slipshod measure loosely prattling on’ (line 4).  This irony is reiterated in our interpretation that the washer-woman, ‘red-armed’ due to constant exposure to detergent and water, is in fact Barbauld’s muse.

‘Washing-Day’ brings together women of different social-class: the mistress of the house, presumably Barbauld’s mother; the household maids and the aforementioned washer-woman.  These women would normally have moved in very different social spheres. However on washing-day the upstairs downstairs mentality is forgotten and we see instead a sense of camaraderie created through their shared experience.  The task of washing is exclusively the realm of women and from lines 9 to 57 of the poem, Barbauld relays to the reader the chaos, disruption, physical and mental hardship which ensues.

In line 9, the poet uses marriage as a metaphor, associating the burden of a ‘yoke’ (a heavy wooden cross-piece attached to an ox to plough fields) to ‘wedlock’.  Here the poet creates an image of both the ox and woman as creatures of burden, with woman experiencing oppression through her sense of duty and domesticity.  This metaphor also identifies women with physical endeavour, an important theme which is repeated in lines 76-77 of the poem, in which each activity associated with washing-day ‘...to wash, to rinse, to wring’ is punctuated by a comma, producing a systematic laboured physical effect analogous to a production line.

Barbauld builds a sense of impending anxiety and dread between lines 10 and 20.  The ‘bowed soul’ coupled with her use of alliteration ‘Which week, smooth sliding after week, brings on too soon’ suggests to us that the spirit of women is twisted by the frequency of this chore.  Her description of the ‘silent breakfast-meal’, ‘nor pleasant smile’ sets a pensive mood in anticipation of the drama and disasters that can effect washing-day.

The weather is an important and recurring theme in the poem.  It is presented as ‘evil’ and uncontrollable, with potential to ruin the women’s hard-work and efforts. The pertinent use of the exclamation mark at the end of line 22, emphasises their angst in appealing to God to spare them the misfortune of rain. The positioning of the caesura creating an extended pause in lines 25 and 27 prior to citing many of the other potential disasters which can befall women on washing-day (dirt and gravel stains, downed lines and toppled clothes horses), enhances the sense of dread.  In addition, the repetition of the word ‘and’ within short, punchy, unrhythmic lines signifies the endless recurrence of such disasters, creating feelings of misery amid the chaos.

Barbauld’s use of alliteration in lines 27 to 28 ‘loaded lines at once / Snapped short’ not only demonstrates how quickly the weather can impact on progress but produces a sensation of the physical weight of the heavy rain-soaked washing.  In lines 29 to 30 the poet trivialises the suffering of martyrs in contrasting their misery with that of a ‘housewife’ on washing-day.  This use of irony linked with the use of enjambment in lines 31 and 32, enables Barbauld to rationalise the wretchedness of a woman whose washing-day is marred by rain:

‘But never yet did housewife notable

Greet with a smile a rainy washing-day.’

This sense of anxiety is echoed in line 43, ‘with impatient hand / Twitched off when showers impend’, revealing a readiness to spring into action should the weather makes a turn for the worse in order to mitigate the crisis caused by the rain.

Apart from the rain unwelcome appearances is another recurring theme of the poem.  Theses appearances relate to anyone or anything that could disrupt the proceedings of the day including the cat (line 16), the master of the home (lines 33 to 45), an unexpected guest (line 46 to 58) and even Barbauld herself as a child (lines 59 to 66).  Indeed the affect of washing-day on household relationships is significant to the structure of the poem.

On washing-day there is a clear shift of power from the man of the house, who is reduced from master to mere bystander.  In line 36 we are told that he should ‘—ask not’ for the attention which he would normally expect to receive namely, cleaning his study or brushing his coat.  The use of the caesura intensifies the strength of the warning and the regularity of punctuation in lines 35 to 41 enhances this terse mood.

The reference to the master’s socks that ‘Gape wide as Erebus’ (line 38), however, is both an example of the poet’s use of simile and pun. In comparing the holes in his socks to the entrance of the underworld/hell, Barbauld injects humour into an otherwise serious segment of the poem.  In line 40 the use of language, by the poet inferring that should the master attempt to escape the chaos in the house and retreat to the garden, he would receive a certain look- ‘thin eye’ depicts total disapproval. This idea being furthered within line 46 in which Barbauld incorporates onomatopoeia. The sheet which ‘Flaps’ in the master’s face and interrupts his daydreaming, acts as an ultimate rebuke to his thoughts and actions.

This sense of irritation is not restricted to the master of the house as ‘unwonted’ visitors receive similar treatment.   The enjambment of lines 46 to 48 culminating with the exclamation of a guest expecting ‘hospitable rites!’ leaves us in little doubt of this.  In place of the usual welcome which the ‘friend’ might receive, they are greeted with ‘stinted courtesy’ and a frugal meal which is consumed in gloomy silence.  As the guest ‘slinks away’ (line 57) the poet recreates an image reminiscent of the cat in the earlier section of the poem.

The remainder of the poem sees a shift in style from mock epic struggle to autobiographical as we move our focus to Barbauld’s own childhood experience of washing-day.  The poet portrays herself as spoilt and somewhat petulant about the absence of her ‘Usual indulgencies’ (line 62), cuddles, treats, stories.  The child seeks refuge in the company of her grandmother, now presumably too aged to partake in the physical exertion of washing-day.  This section of the poem provides a distinct contrast.  Here we witness the frivolity of child’s play, ‘though oft her spectacles / With elfin cunning hid’ and the tolerance of at least one woman in the house, which is emphasised with use of a caesura at the end of line 73.  The overall lift in mood is reflected in the rhythm which appears more calm and composed.  The only interruption to this ambience is the ‘mother’s voice’ issuing orders, which momentarily reminds us of the toil and grind associated with washing-day.

The final section of the poem begins with a period of quiet reflection to which we can respond on many levels:

‘Then I would sit me down, and ponder much

The grammatical order of words, placing ‘me’ in the middle of the sentence indicates that these are the thoughts of a child.  More importantly the use of alliteration in the second line could simply be emphasising that children do not understand why clothes need to be washed or perhaps more significantly that Barbauld is challenging or trivialising the importance of washing-day in the domestic calendar.

At the end of the poem we see transcendence from the domestic scene. Barbauld contrasts in lines 81 and 82 the imagery of the ‘floating bubbles’ with the Montgolfier balloon.  However, whereas the bubbles represent a child’s dreams, the balloon by comparison is real, a testament to man’s invention and more importantly symbolic of both Barbauld’s irritation with and appreciation of everyday life.  In this sense Washing-Day demonstrates that creativeness can thrive even within an ordinary environment.

In conclusion I wish to revisit Barbauld’s preface in which we learn from Jacques’ that the world and life are cyclical, therefore our poem celebrates the three ages of women: the child wondering why washings were, the mother supervising the wash and the grandmother watching the children. Through the use of various poetic techniques Barbauld portrays not only this but the inescapability of womanly duty, however, even in the chaos of washing-day there is also an underlying promise that there is potential for change. This is conveyed through the poet’s promotion of imagination, technology and creativity.  In the closing lines of the poem Barbauld’s bubble or rather her verse, presents itself as a positive affirmation that the future can be different to the past.

‘Earth, air, and sky, and ocean, hath its bubbles,

And verse is one of them—this most of all’