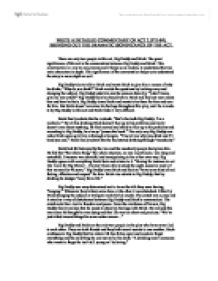 WRITE A DETAILED COMMENTARY OF ACT 2 (P71-84). BRINGING OUT THE DRAMATIC SIGNIFICANCE OF THE ACT. There are only two people in this act, Big Daddy and Brick. The great significance of this act is the conversation between Big Daddy and Brick. This conversation is a one to one process and it helps us as readers, to understand the two main characters in depth. The significance of the conversation helps us to understand the story in more depth as well. Big Daddy tries to talk to Brick and wants Brick to give him a reason of why he drinks, "Why do you drink?" Brick avoids the questions by looking away and changing the subject. Big Daddy asks him and he answers them by, "I don't know, give me my crutch!" Big Daddy feels he should talk to Brick and find out more about him and how he feels. Big Daddy loves Brick and wants to be there for him and care for him. But Brick doesn't examine his feelings throughout this play, until he is made to by Big Daddy in this act and Brick finds it very difficult. Brick finally admits that he is drunk, "that's the truth Big Daddy. ...read more.

They are both friends and they both reveal secrets to one another. Brick confesses to Big Daddy that his whole life has fallen apart and wants to forget everything and the only thing he can turn to be his drink. "A drinking man's someone who wants to forget he isn't still young an' believing." During their conversation Big Daddy mentions Skipper. "You started drinking when your friend Skipper died." Here is where the tension builds up between the two of them. There is a "silence for five beats." These five beats builds up tension between the two characters and the audience. This is also the second time the audience hears the name Skipper. Big Daddy brings things out in the open. On stage five beats of silence are very long and build up a lot of tension. After the five beats Brick tries to grab his crutch, again the prop here acts as a way of freedom and running away from the truth. Guilt always finds a way to catch up to you. On the same page there is a very long stage direction. Here Tennessee Williams intruded in the act because it shows us the human nature between people and what they are capable of doing. ...read more.

This line of Brick's was written in Italics. This portrays the importance of the line and builds up the tension. "How about these birthday congratulations, when ev'rybody but you knows there won't be any!" Suddenly there is a phone ring in the back round. This prop acts as a ring and this ring signifies the mendacity, the guilt of everyone. Brick suddenly realises what he has said and tries to change the subject. Big Daddy finally realises that everyone lied about the cancer. Brick had told Big Daddy he had cancer and he regrets telling him, but he can't go back. "Mendacity is a system that we live in." Brick here on this page (83) is truthful and honest about everyone and the mendacity of everyone. "We've been friends...- And being friends is telling each other the truth...You told me! I told you!" Straight after a child rushes into the room where Big Daddy and Brick are. The child then runs out shouting and screaming, "Bang, bang, bang....!" I feel that Tennessee Williams had put this prop in, because it made Bid Daddy realise what Brick was going through. He realised that the nature between all human beings and what they are capable of doing, what all of us are capable of doing. "Lying! Dying! Liars!" ...read more.