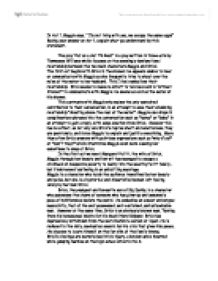 Cat on a Hot Tin Roof

In Act 1, Maggie says, " I'm not living with you, we occupy the same cage!" Basing your answer on Act 1, explain what you understand by this statement. The play "Cat on a Hot Tin Roof" is a play written in three acts by Tennessee Williams which focuses on the seemingly dysfunctional relationship between the two main characters Maggie and Brick. The first act begins with Brick in the shower; he appears unable to hear or communicate with Maggie as she frequently tries to shout over the noise of the water to her husband. This I feel symbolises their relationship. Brick seems to make no effort to talk back and is "without interest" to communicate with Maggie; he seems as cold as the water of his shower. This contrasts with Maggie who makes the only sustained contribution to their conversation, in an attempt to save their crumbling relationship "shouting above the roar of the water". Maggie also drops in complimentary phrases into the conversation such as "honey" or "baby" in an attempt to gain a reply, with some emotion from Brick. ...read more.

Turning from his h********l desire for his dead friend Skipper, Brick has depressively withdrawn from the world behind a screen of liquor. He is reduced to the daily, mechanical search for his click that gives him peace. He chooses to locate himself on the far side of the family drama. Brick's feelings are materialised in his injury, a broken ankle incurred while jumping hurdles on the high school athletic field. Tennessee Williams has cleverly used "Brick" as a name, which definitely shows similar characteristics to its character. His name also could be interpreted as him building a wall between himself and others especially his wife Maggie. He is hard, isolated, impassive, detached and uncommunicative, all of which are characteristics that are reflected in his neglect of his relationship with Maggie. Brick himself has the "additional charm of that cool air of detachment" As an audience some of the first images we gain of Maggie are very feminine and sensual ones as she "stands in a slip of ivory satin and lace". ...read more.

This jealousy is in the form of hate, towards the children of Gooper and Mae Brick's brother and sister-in-law, "it's to bad because you cant wring their necks". " This slight input is often unnecessary, as Maggie has grown used to speaking and thinking for Brick "Why you know what they're up to"., "touches her breast and then her hips with her two hands". The feminine way in which Maggie is described relates to the feline way in which she is also portrayed "Why! - am I so catty?" she is like a "Cat on a Hot Tin Roof" in the may she is unable to stay still "Margaret moves about the room...moves on" Maggie's vulnerability is not only in Brick's naivety towards her "figure" but also in society "I feel all the time like a cat on a hot tin roof!" as she is regarded as coming from a background "poor as job's turkey" "having to maintain some semblance of social position,". Maggie is guilty of committing "mendacity" she does not only lie to herself in expecting to "revive" her and Brick's "s*x life" and relationship but her own lies have convinced her of it as she truly believes in it happening "and its going to revive again" ...read more.