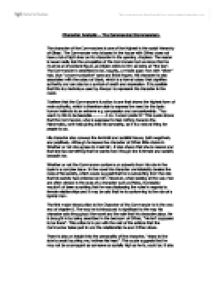 Character Analysis - The Commander/Commanders. The character of the Commanders is one of the highest in the social hierarchy of Gilead. The Commander who is based in the house with Offred does not have a lot of light shed on his character in the opening chapters. The reader is never really told the occupation of the Commander but we know that he must be an important figure, as Ofglen refers to him as being at "the top". The Commander is described to be, roughly, a middle aged man with "silver" hair, blue "uncommunicative" eyes and thick fingers. His character is also associated with the colour of black, which is a formal colour that signifies authority and can also be a symbol of death and depression. It is possible that this is a technique used by Atwood to represent his character in the novel. I believe that the Commander's function is one that shows the highest form of male authority, which is therefore able to express the need for the basic human instincts to an extreme e.g compassion and companionship. ...read more.

The first major introduction to the Character of the Commander is in the very end of chapter 8. The way he is introduced is significant to the way his character acts throughout the novel and the role that his character plays. He is brought in by being described in the bedroom of Offred, "He isn't supposed to be there". This action is in par with the rest of the actions that the Commander takes part in and the relationship he and Offred share. There is also an insight into the personality of the character, "steps to the side to avoid touching me, inclines his head". This quote suggests that he may not be as arrogant as someone as socially high as he is, could be; it also shows that he must have some humane feelings as his actions imply that he is embarrassed that he was caught. Chapter 15, is the next time the reader is given the chance to get a deeper look into the Commander. ...read more.

This shows that there is now recognition of the character of Offred as a person, not just a Handmaid. The Commander and Offred meet each other regularly and this leads to him taking her out, where they meet other Commanders and women. This incident is something that leads to Offred getting in trouble with Serena in the end of the book, which relates to the part that the Commander has played throughout the book, his connections with Offred have always been forbidden and it also links to his introduction in to the book. I think that the character of the Commander is interesting, as he appears to be a descent person despite the role that his society has inflicted on him. It is also ironic that although he makes a relationship with Offred partly to make her more comfortable, it is this relationship that gets her in to trouble. I also like his character because it shows that there is weakness in the most respected people, and that everyone has a need for companionship ...read more.