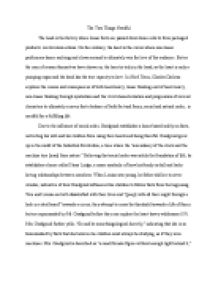 Charles Dickens charts the development of several major characters in Hard Times to conclude that the only characters who have can see through both fact and fancy are successful.

﻿The Two Things Needful The head is the factory where linear facts are passed down brain cells to form packaged products: our loveless actions. On the contrary, the heart is the circus where non-linear performers dance and sing and clown around to ultimately win the love of the audience. But as the men of reason themselves have shown us, the heart is truly in the head, as the heart is only a pumping organ and the head has the true capacity to love. In Hard Times, Charles Dickens explores the causes and consequences of both head-heavy, linear thinking and of heart-heavy, non-linear thinking through symbolism and the vivid characterization and progression of several characters to ultimately convey that a balance of both fact and fancy, social and natural order, is needful for a fulfilling life. Due to the influence of social order, Gradgrind establishes a home based solely on facts, restricting his wife and his children from using their hearts and being fanciful. Gradgrind grew up in the midst of the Industrial Revolution, a time where the ?ascendancy of the clock and the machine tore [man] from nature.? Believing that social order was solely the foundation of life, he establishes a home called Stone Lodge, a name symbolic of how his family is dull and lacks loving relationships between members. ...read more.

Unlike Jupe and Sissy who are too fanciful and Gradgrind and Bitzer who are too factual, Mr. Sleary has a balance that allows him to give Sissy good advice: follow facts at the Stone Lodge, obey the Gradgrind?s contract, and temporarily forget the fanciful circus. He supports her time with Mr. Gradgrind because he wants her to develop an education of the mind so she too can attain balance in her life. Mr. Slearly himself has asthma symbolizing how his breath, his spirit, is slowly being polluted by the smog of the Industrial Revolution symbolic of extremely linear thinking. Mr. Sleary also informs Mr. Gradgrind, ?People must be amuthed, Thquire, thomehow . . . they can?t alwayth be a-working, nor yet they can?t be alwayth a ?learning. Make the betht of uth? (47). Mr. Sleary explains that people need a balance of both work and play, fact and wonder in their lives, but Mr. Gradgrind does not stumble upon this realization until it is far too late. Louisa is distraught in her loveless marriage and Mr. Gradgrind ultimately realizes his mistake in emphasizing solely head-heavy education; Harthouse, who has no heart or head, and Tom, whose heart is weak, both symbolize the consequences of unbalanced thinking. Bounderby thinks in a solely factual way similar to Mr. ...read more.

Gradgrind, on the other hand, ?makes his facts and figures subservient to Faith, Hope, and Charity? and attempts to bring education of the heart to Parliament; however, he is only taunted and struggles throughout the rest of his life. Sissy has attained the desired balance of both fact and fancy and thus is happy and has happy children and lives a fulfilling life. Tom writes a letter to Louisa saying ?that all the treasures in the world would be cheaply bartered for a sight of her dear face,? illustrating that he has come to see that his mischievous ways had no place and that he now loves Louisa as a brother should (299). Alas, he dies on the journey to see Louisa and is thus robbed of fulfilling life, indicating that he came to realize he needed a balance far too late. Louisa ?grows learned in childish lore,? meaning she confronts and accepts the piece of her, her heart, that was never nurtured. She helps raises Sissy?s children ?as a duty to be done,? indicative of how she still has not achieved a balance of her life (300). Charles Dickens charts the development of several major characters in Hard Times to conclude that the only characters who have can see through both fact and fancy are successful. ...read more.