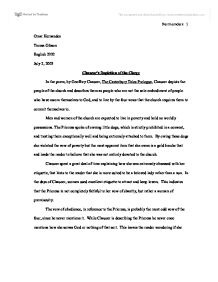 Chaucer's Depiction of the Clergy.

Omar Hernandez Teresa Gibson English 2332 July 2, 2003 Chaucer's Depiction of the Clergy In the poem, by Geoffrey Chaucer, The Canterbury Tales Prologue, Chaucer depicts the people of the church and describes them as people who are not the sole embodiment of people who have sworn themselves to God, and to live by the four vows that the church requires them to commit themselves to. Men and women of the church are expected to live in poverty and hold no worldly possessions. The Prioress spoke of owning little dogs, which is strictly prohibited in a convent, and treating them exceptionally well and being extremely attached to them. ...read more.

This indicates that the Prioress in not completely faithful to her vow of chastity, but rather a woman of promiscuity. The vow of obedience, in reference to the Prioress, is probably the most odd vow of the four, since he never mentions it. While Chaucer is describing the Prioress he never once mentions how she serves God or nothing of that sort. This leaves the reader wondering if she serves God well or does not, but it is obvious that she has failed to follow the other vows and that this one is no exception. A nun should pray, study, do service to God, and live a confined life free from temptation, but the Prioress has already violated the first three vows and those have to be followed to successful fulfill the vow of obedience. ...read more.

It can be easily said that she has violated every vow, but Chaucer never comes out and say it straight forward. He leaves it up to the reader to decide how they picture the Prioress. The clergy are always assumed to be good people because of what they are taught and their position in the church. People who give themselves to God are believed to be good people at heart because what other kind of person would give their life to serve God's will. Chaucer talks about the clergy for what they really are, fake. The clergy are not always what they seem to be and Chaucer merely pointed that out. It was about time someone said something, they are given way too much credit. Hernandez 1 ...read more.