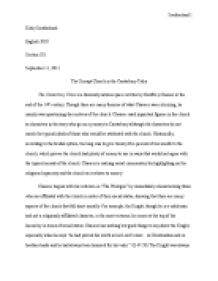 Chaucer's Depiction of the Corrupt Church in the Canterbury Tales

﻿Southerland Kirby Southerland English 2010 Section 101 September 11, 2012 The Corrupt Church in the Canterbury Tales The Canterbury Tales is a famously satirical piece written by Geoffrey Chaucer at the end of the 14th century. Though there are many theories of what Chaucer was criticizing, he mainly was questioning the motives of the church. Chaucer used important figures in the church as characters in the story who go on a journey to Canterbury although the characters do not match the typical ideals of those who would be attributed with the church. Historically, according to the feudal system, the king was to give twenty-five percent of his wealth to the church, which proves the church had plenty of money to use in ways that would not agree with the typical morals of the church. Chaucer is making social commentary by highlighting on the religious hypocrisy and the church as it relates to money. Chaucer begins with his criticism in ?The Prologue? by immediately characterizing those who are affiliated with the church in order of their social status, showing that there are many aspects of the church that fall short morally. ...read more.

Chaucer then goes on to explain that the Prioress ?had a few small dogs that she fed- with roast meat or milk and fine bread? (ll 146-147), further showing that the nun didn?t take her religious duties as seriously as she should have. The Monk comes next in Chaucer?s hierarchy, with the description being ?he didn?t give a plucked hen for that text that said hunters are not holy men?? ?why should he study and drive himself mad.? (ll 177-178) Chaucer mocks the Monk?s lifestyle by criticizing what he chose to do instead of taking his holy vow of silence. He was a hunter and wore expensive clothes: ?I saw that his sleeves were edged at the cuff with gray fur?and to fasten his hood under his chin he had a very intricate pin made of gold? (ll 193) though as a man of the church he should not have had the funds to support his lavish lifestyle, which is why Chaucer criticized the church, because he thought that it was corrupt. Chaucer goes on to say, ?He was a fine fat lord in splendid shape,?(ll 200) ...read more.

He was also a learned man, a clerk; The Christian gospel he would truly preach, devoutly his parishioners to teach,? (ll 479-482) from this line the reader gains a more clear understanding for how the church was supposed to be viewed. Those who were affiliated with the church were supposed to be devout and faithful to their God, though many did not fulfill the stereotypes that they were expected to. All in all, the problem with the church is that those who are supposed to be the most holy are not at all. The obsession with money and the wrongful spending of it by all of those who are affiliated is what made the church receive so much criticism. The implied solution to the corruptness of the church is simple: to remove the money. The one character who received little criticism was the only one who helped the church be seen in a positive light, and that was the Parson. By removing the excessive money from the church, the corrupt clergy members would go back to their vows of silence and poverty and the church would be restored to its original holiness. ...read more.