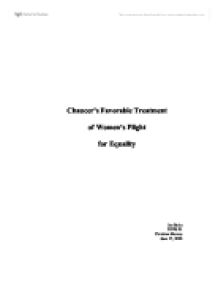 Chaucer's Favorable Treatment of Women's Plight for Equality Joe Bohn 303W-01 Christian Moraru June 17, 2000 Joe Bohn English 303W-01 Chaucer's Favorable Treatment of Women's Plight for Equality Throughout Geoffrey Chaucer's "Canterbury Tales," characters are depicted which epitomize and exaggerate the corruption and injustices commonly experienced during his lifetime. Chaucer explicitly utilizes his characters as instruments, which serve to ponder taboo subjects of the times. Amongst these taboo topics, he makes his strongest points by portraying Alison, the Wife of Bath, in order to shed light upon the plight of medieval woman's oppression. Chaucer urges his audience to consider and reconsider patriarchal society's treatment of women. First, we must recognize that Chaucer had much reason to sympathize with the plight of women. According to a 1357 record-made when he was approximately fifteen years of age-young Chaucer was employed by a wealthy count. That Christmas, the countess showed him great kindness by providing him with a generous amount of money, such that young Geoffrey could buy himself clothing and other items (Beidler 4). Clearly, this generosity would have left a mark upon him at such an impressionable age. According to an ambiguous legal record, there was another instance in which a woman showed kindness to Chaucer. In his later life, he was accused of a crime, although there is no certainty as to whether or not he was guilty. A woman named Cecilia Chaumpaigne bailed him out (Beidler 6). ...read more.

Alison goes on to say that she considered the book to be denigrating and that her anger became unbearable: I saugh he wolde nevere fine To redden on this cursed book all night, All sodeynly three leves have I plight Out of his book right as he radde, and eke I with my fest so took him on the cheke (l. 788-792) Here, Chaucer enthralls Alison's audience by depicting a woman physically lashing out against her husband, hence defying patriarchal authority. The book is symbolic of the patriarchal wisdom-undisputed by Chaucer's society, and she defies it. In an even stronger turn of events, Alison forces her husband to burn the book, hence submitting to her will and putting himself at her mercy: He yaf me all the bridel in mine hond, To han governance of hous and lond... And made him brenne his book anon right tho (l. 813-816) In accordance with feminist ideals, the husband not only submits but also gives up control over the household and land, in exchange for her forgiveness. Alison empowers the female reader by explaining that she won her own sovereignty by fighting for her freedom. "I hadde giten unto me / By maistrie all the soveraynetee"(l. 817). Chaucer relentlessly awes his male audience and empowers his female audience. In trying to make Chaucer's audience sympathize with Alison's plight, he describes the "happily ever after" conclusion to her prologue: After that day we hadden never debaat. ...read more.

His wife questions his reluctance to fulfill his marital obligations. Chaucer depicts a knight who is able to immorally steal a young maiden's virginity, but is simultaneously unwilling to have sex with his own wife. Chaucer, once again places man at the mercy of a woman, in order to teach him a lesson. At the conclusion Alison's tale, the knight-symbolic of mankind-puts his fate in his wife's hands, an ideal image in feminism. When the wife asks him whether he would prefer her to be young and unfaithful or old and loyal, he says: My lady and my love, and wyf so dere, I putte me in youre wise governance: Cheseth yourself which may be most plesaunce And most honour to you and me also (l. 1236-1239) In saying this, the knight relinquishes all authority over his wife and gives her full command over their marriage. When the knight's loathly wife realizes that his hypocrisy and chauvinist tendencies have disappeared, she transforms into a young and beautiful woman. Alison hereby implies that all husbands should likewise give in to their wives. Chaucer's remarkable and fairytale-like ending is intended to convince men that women should be treated with more equality. In conclusion, Geoffrey Chaucer depicts and exaggerates the corruption and injustices commonly experienced during his lifetime. By utilizing the character of Alison, the Wife of Bath, as an instrument, Chaucer is able to address the taboo subject of inequality towards women. By disguising himself as Alison, hence empowering a female protagonist, Chaucer is able to urge his audience to consider and reconsider patriarchal society's treatment of women. ...read more.