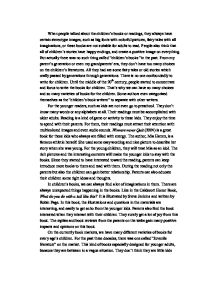 When people talked about the children's books or readings, they always have certain stereotype images, such as big fonts with colorful pictures, fairy tales with all imaginations, or these books are not suitable for adults to read. People also think that all of children's stories have happy endings, and create a positive image on everything. But actually there was no such thing called "children's books "in the past. From my parent's generation or even my grandparents' era, they don't have too many choices on the children's literatures. All they had are some fairy tales or old stories which orally passed by generations through generations. There is no one confoundedly to write for children. Until the middle of the 20th century, people started to concentrate and focus to write the books for children. That's why we can have so many choices and so many varieties of books for the children. Some authors even categorized themselves as the "children's book writers" to separate with other writers. For the younger readers, such as kids are not even go to preschool. They don't know many words or any alphabets at all. Their readings must be accomplished with older adults. Reading is a kind of game or activity to these kids. They enjoy the time to spend with their parents. For them, their readings must attract their attention with multicolored images and even audio sounds. ...read more.

This series is a typical juvenile literature for younger adults and adults too. Inside of the books, the authors describe how the main character, Harry, takes adventure with his friends, and how they fight in the magic world. Every detail and the move of the character do attract the readers, including me. According to Natalie Babbitt in Happy endings? Of course, and also Joy (1970), she stated that books for adults are serious in intent whiles books for children are designed to amuse. But she also believed that idea is only an assumption and nothing more. In the Public world, there are many serious stories for adults and truckloads of children's stories intended only for pleasure, but the reverse is just as true. There is no clear boundary between the children's books and the adult's readings. Some people think that the children's stories always end with a happy ending, and there is no sad thing in the context. The assumption is wrong, and lack of evidences. There is really no difference where emotional themes are concerned. In children's books, we can find love, hates, and others emotions as well. Same things we can get in the adult's literatures. The only difference is how the author describes the theme and delivers the theme to the readers. Most of the word usages in children's literature are straight forward, and without a lot of hidden messages. ...read more.

All these movies not only attract the young audiences, but also attract all ages of people. That's because the stories are touching and meaningful to people. Everyone can accept the stories. For in the long run it is children themselves who decide what they want. For every book is a message, and if children happen to receive and like it, they will appropriate it to themselves no matter what the author may say not what label he gives himself. I believe that a good children' book should be suitable for all ages of readers. No matter how old the readers are, they should all enjoy the books as anyone else. Pamela Travers also thought that grownups are a very important part of children's literature. Because when the grownups choose the books for the children to read, they should also know the details of the books, and what is the theme for the books. Books are so important to influence the children, and a good children's book is hard to identify. Children's books are not only the colorful pictures which to entertain the children's hearts, but also contain meaning passages to educate children's souls. 1. Turner, S (1989) Bad books for children- What are they? Emergency Liberian, 15-18 2. McNeill, J (1972) When the magic has to stop. The Horn Book Magazine.35-40 3. Tunis, J.R. (1986). What is a juvenile book? The Horn Book Magazine, 22-26 4. Babbitt, N. (1970). Happy ending? Of course, and also joy. The New York Times Book Reviews (Part 2), 1-50 5. Williams, J. (1980). Looking for Pattern. The Signal approach to children's books. 13-22 ...read more.