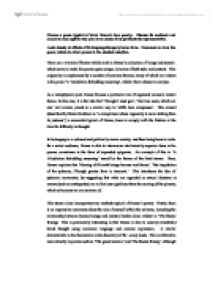 Choose a poem typical of John Donne's love poetry - Discuss its methods and concerns and explain why you have chosen it as particularly representative.

Choose a poem typical of John Donne's love poetry. Discuss its methods and concerns and explain why you have chosen it as particularly representative. Look closely at effects of its language/imagery/verse form. Comment on how the poem relates to other poems in the studied selection. There are a variety of factors which exist in Donne's collection of 'songs and sonets', which serve to make his poems quite unique, in terms of both style and content. This originality is emphasised by a number of common themes, many of which are evident in his poem 'A Valediction forbidding mourning', which I have chosen to analyse. As a metaphysical poet, Donne focuses a particular line of argument around a central theme. In this case, it is the idea that 'Though I must goe', 'Our two souls, which are one' will remain joined in a similar way to 'stiffe twin compasses'. This conceit (described by Helen Gardiner as 'a comparison whose ingenuity is more striking than its justness') ...read more.

Donne speaks of the insignificance of the earth's movements, having previously given instructions to avoid 'teare-floods' and 'sigh-tempests', and later dismissing those who cannot be parted as 'dull sublunary lovers'. By having a common strand linking his imagery (later the imagery of a pair of compasses), Donne is able to make his comparisons neat and inert, keeping his expression concise yet highly knowledgeable. In order to do so, Donne avoids the use of iambic pentameter, instead employing the use of eight syllables per line, described by Helen Gardiner as 'a limited frame for compressed thoughts'. Indeed, the seamlessly effortless rhythm of the poem produces an air of resignation, especially apt for the context of this poem, which gives instructions to 'passe mildly away', and 'make no noise'. The breaking of this meter is therefore very effective in highlighting particularly emotional lines, for example 'Our two soules therefore, which are one, /Though I must go', creating a poignant sense of tenderness. ...read more.

The poem comes to a succinct ending, in its explanation that 'Thy firmness makes my circle just, /And makes me end, where I begunne'. The "compass" imagery is thus brought to its logical conclusion in the idea that the lover will return to where he started: 'in the centre sit[s]' her soul. The journey has come full circle, and hence they can be reunited after the separation. Although this poem is almost entirely focused on a particularly sensitive and 'refin'd' aspect of love, there is one image of the arm of the compass which 'growes e***t as that comes home', thus dispelling the sense of bodily contact being unnecessary. The gentle tone does not make its argument any less compelling, due to cleverly constructed comparisons which are equally effective in both their persuasive technique and romantic content. Thus, I feel 'A Valediction forbidding mourning' typifies many of the characteristics of John Donne's love poetry, whilst retaining its own uniqueness. ...read more.