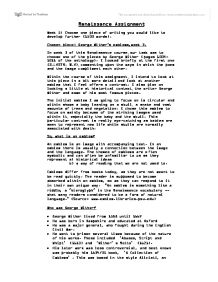 Choose one piece of writing you would like to develop further - Chosen piece: George Wither's emblems.

Renaissance Assignment Week 5: Choose one piece of writing you would like to develop further (1500 words). Chosen piece: George Wither's emblems, week 3. In week 3 of this Renaissance course, our task was to choose one of the pieces by George Wither (pages 1004- 1011 of the anthology). I looked briefly at the first one (ILLVSTR. XLV), commenting upon the ways in which the poem and the image compliment each other. Within the course of this assignment, I intend to look at this piece in a bit more detail and look at another emblem that I feel offers a contrast. I also plan on looking a little at historical context, the writer George Wither and some of his most famous pieces. The initial emblem I am going to focus on is circular and within shows a baby leaning on a skull, a snake and vast amounts of trees and vegetation. I chose this emblem to focus on mainly because of the striking images used within it, especially the baby and the skull. This particular contrast is really eye-catching as babies are seen to represent new life while skulls are normally associated with death. ...read more.

Therefore the words used such as "Earth", "Water", "Cloud" and "Airy Vapour", compliment the image of a living baby, a living snake and living vegetation very well. However the image of the skull, which is usually one associated with death, is complimented also by the poem, in that the words "Mortality" and "Deaths-head" are used. I obtained the images above and left from an emblems website (www.emblems.arts.gla.ac.uk/SES/). I have included them to emphasis that snakes, nature and humans were commonly used in 16th century emblems due to their strong symbolic values. The one that particularly caught my attention was the second one that shows the snake surrounding what looks like a mermaid. This idea of a circle made from a snake with its tail in its mouth is suggested in both the image (explicitly) and in the poem, "The Snake, her Taile devouring, doth implie the Revolution". In line with the poems themes, life and death, the image of the snake seems to be suggestive of the cycle of life, the way as soon as someone dies another is born and this could be why the baby is juxtaposed beside the skull. ...read more.

I felt the piece I concentrated on linked quite well with George Wither's third piece (ILLVSTER. XXVIL) that similarly showed a skull. Instead of the main themes being life and death, they are time and death (therefore they are quite similar in that time is something which is a major part of life). Like I said death is a key feature in this piece, being represented by a skull, while a winged hourglass represents time (I think this also relates to death, as wings are often associated with angels). Looking back at this section of work aroused my interest in not just Renaissance symbols but also more contemporary ones. Within our society today it is the symbols from dreams that interest me particularly. To conclude this piece of work I am going to discuss the meanings of the symbols seen in the emblems I have looked at by Wither, according to Edwin Raphael's 'The Complete Book of Dreams'. Snakes: Dreaming of snakes is said to signify danger and/or impending imprisonment. It can also be said to denote sickness and hatred, or deception by a lover. Sometimes it is read as a sign of sin or temptation (Presented as the only negative symbol). Skull: An engagement is on the horizon. Babies: Denotes joy. Nature/trees: Comfort/enjoyment. Happy children. ...read more.