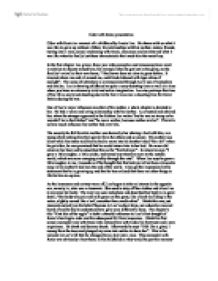 Cider with Rosie presentation Cider with Rosie is a memoir of a childhood by Laurie Lee. He shares with us what it was like to grow up without a father, his relationships with his mother, sisters, friends, turning into a man, s****l awakening with Rosie, innocence and naivety and what it was like when he finally lost these characteristic that made him the sweet boy. In the first chapter Lee gives a three year olds perception and misconceptions: small in relation to objects around him, for example when he got lost in the grass, on the families' arrival to their new home, "I had never been so close to grass before. It towered above me and all around me, each blade tattooed with tiger-skins of sunlight". The sense of adventure is communicated through Lee's use of metaphors and similes. ...read more.

He never did return to her bed, and he described this as the "first betrayal". In return he says "I grew a little tougher, a little colder, and turned my attention more to the outside world, which was now emerging visibly through the mist". When Lee says he grew a little tougher, to me, it sounds as if he thought that this betrayal of not been allowed to sleep in his mother's bed was the end of the world. I also get the impression by his statement that he is growing up and that he has realised that there are other things in life for him to explore. As the innocence and naivety wore off, Lee began to take an interest in the opposite s*x, namely Jo, who was a classmate. She used to strip off her clothes and allow Lee to examine her body. ...read more.

This is the moment in Lee's life that he changes from a boy into a man. This encounter with Rosie was obviously a key theme in his childhood as why would he put this memory as the title. Was it because at this time in his life he finally became a man, signifying the end of his childhood? This is arguable. Laurie Lee has written about his childhood as he saw it because it is an autobiographical novel that describes his childhood and growing up of the nation. The book has a detailed account of a childhood that seemed filled full with fun, adventure and typical childhood mischief. I enjoyed this book because Lee's childhood was similar and different to mine in so many ways. Similar by the way of innocence, and being loved by my family unconditionally, having fun with friends (getting up to mischief) and different by the way of family structure, having two parents, a monthly income, order and tidiness in the house. ...read more.