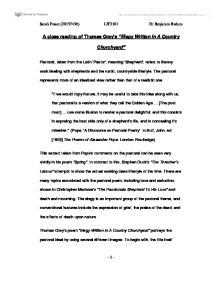 A close reading of Thomas Gray's "Elegy Written In A Country Churchyard" Pastoral, taken from the Latin 'Pastor', meaning 'Shepherd', refers to literary work dealing with shepherds and the rustic, countryside lifestyle. The pastoral represents more of an idealized view rather than that of a realistic one. "If we would copy Nature, it may be useful to take this idea along with us, that pastoral is a version of what they call the Golden Age ... [The poet must] ... use some illusion to render a pastoral delightful; and this consists in exposing the best side only of a shepherd's life, and in concealing it's miseries." (Pope, 'A Discourse on Pastoral Poetry'. In b**t, John, ed. [1963] The Poems of Alexander Pope. London: Routledge) This extract taken from Pope's comments on the pastoral can be seen very vividly in his poem "Spring". In contrast to this, Stephen Duck's "The Thresher's Labour" attempts to show the actual working class lifestyle of the time. ...read more.

They could have been born rich and done nothing great with their lives, but they were born into a rustic lifestyle and were great and glorious because of what they did within their life. The "tolls" are a sound made by a bell being rung extremely slowly, announcing the death of a person, who has parted from this life over to death. It seems that Gray does not want the reader to be 'in' the poem and distances the reader from the poem and the scene by placing himself in it. The speaker is alone, in the solitary churchyard awaiting the end of the day when he is left to the "the world and darkness" (Line 4). This darkness can be seen as an everlasting sleep, the darkness of death. There are religious themes throughout the poem in which Gray uses an image of monastic lifestyle, alongside that of the countryside lifestyle. ...read more.

"Can storied urn or animated bust Back to its mansion call the fleeting breath?" (Lines 41 - 42) Grays play on words in line 59 again paints a picture in which these anonymous people in their graves are the same as those who could afford to pay for great memorials. "Some mute inglorious Milton here may rest," (Line 59) Milton was deaf, not blind and was certainly glorious and admired. Gray tries to say that these people have never had the chance to show that they too are intelligent and are worthy of the same mourning as others, because they have been patronised by "...lis'ning senates..." and "threats of pain and ruin...". In Line 55, "Full many a flow'r is born to blush unseen," he strengthens his point by stating that the villagers have just as many qualities, and are just as intellectual as the glorious, but they move about unheard, unseen and anonymous. These villagers are still human beings and they want to be remembered, just like everyone else, but they want to be remembered for different things and for different reasons. ...read more.