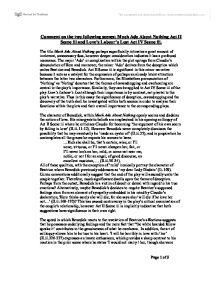 Comment on the two following scenes: Much Ado About Nothing Act II Scene iii and Love's Labour's Lost Act IV Scene iii. The title Much Ado About Nothing perhaps superficially intimates a great amount of irrelevant, unnecessary fuss, however deeper consideration indicates it has a profound resonance. The major 'Ado' or complication within the plot springs from Claudio's denunciation of Hero and moreover, the minor 'Ado' derives from the deception which unites Beatrice and Benedick. Act II Scene iii is significant in this minor narrative because it acts as a catalyst for the expression of perhaps an already latent attraction between the latter two characters. Furthermore, the Elizabethan pronunciation of 'Nothing' as 'Noting' denotes that the themes of eavesdropping and overhearing are central to the play's importance. Similarly, they can be applied to Act IV Scene iii of the play Love's Labour's Lost although their importance is by contrast, not pivotal to the play's narrative. Thus in this essay the significance of deception, eavesdropping and the discovery of the truth shall be investigated within both scenes in order to analyze their functions within the plots and their overall importance to the corresponding plays. ...read more.

provides a clear reminder in the reader's mind of the calculated conspiracy to shame Hero, soon to take place. In addition, the song acts as an apology for male inconstancy or fundamental ambivalence, perhaps implying that 'One foot in the sea, and one on the shore / To one thing constant never' (II.iii.64) is inevitable. The theme of male inconstancy is additionally prevalent within Act IV Scene iii of Love's Labour's Lost. At the beginning of the play Berowne Dumaine and Longaville swear an oath of allegiance that they will solely dedicate all their efforts to the Court and their study. However in contrast to Much Ado About Nothing, the play turns the conventional allegory of love upside down, for the men's oath is suppose to protect them from the importunities of suitors. 'I am betrayed by keeping company / With men like you, men of inconstancy' (IV.iii.176-177) indicates not a warning to women about male variability, (Balthsar's song) but ironically in this instance, suggests that women are the influential source of these circumstances. In comparison to Act IV Scene iii in Love's Labour's Lost the hoax of Benedick is written ultimately in the form of prose. ...read more.

His final soliloquy where he states, 'When I said I would die a bachelor, I did / not think I should live till I were married' (II.iii.234-235), suggests the plot to deceive him has been productive. In the wider context of the plot, the scene becomes a play within a play, which drives the eavesdropper Benedick to love his former antagonist. Furthermore, as the first hoax in a play full of several deceptions, the sub plot appears to represent an opportunity for new beginnings whilst in sharp contrast the main narrative is soon to experience the bleak complications of Don John's deception of Hero. Nonetheless, the tone at the end of Act II Scene iii is one of optimism as is indicated by Benedick's statement, 'I will go get her picture' (II.iii.254). In this instance the theme of deception and eavesdropping works for the good of the narrative. It allows Benedick to discover a certain truth, perhaps one that he wants to hear, but definitely one that remodels his character into a confident and steadfast human being, a contrast to the whimsical, stubborn and image of male inconstancy that he represented at the beginning of the play. Endnotes 1, All quotes from Much Ado About Nothing and Love's Labour's Lost are from 'The Arden Shakespeare'. Page 1 of 5 ...read more.