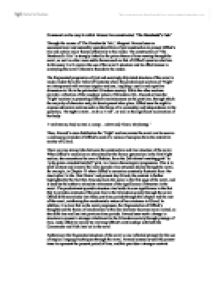 Comment on the way in which Atwood has constructed 'The Handmaid's Tale'.

Comment on the way in which Atwood has constructed 'The Handmaid's Tale' Through the course of 'The Handmaids Tale', Margaret Atwood uses an unconventional and ostensibly unordered form of plot construction to present Offred's tale and certain major themes effectively to the reader. The construction of 'The Handmaid's Tale' is strongly linked to the prime theme of time running through the novel, as well as other more subtle themes such as that of Offred's passive rebellion. In this essay I will explore the use of the novel's structure and its effectiveness in conveying the novel's thematic threads to the reader. The fragmented progression of plot and seemingly disjointed structure of the novel is made evident from the Table Of Contents where the predominant sections of 'Night' are interspersed with various singular sections, implying a cyclic and repetitive dimension to life in the patriarchal Gileadean society. ...read more.

This is in stark contrast and irony to the more sporadic time structure shown through the novel, for example, in Chapter 13 where Offred's memories constantly fluctuate from 'the time before' to the 'Red Centre' and present day Gilead; the contrast is further highlighted by the fact that Atwood places the scene in the first page of the novel, and is used by the author to stimulate awareness of the significance of structure in the novel. The predominant sporadic structure also holds its own significance in the fact that it provides contrasts of the past time to the Gileadean society through the novel. Offred drifts seamlessly into these past time periods through this chapter and the rest of the novel, reinforcing the anachronistic nature of her existence in Gilead. In addition, it is clear that as the novel progresses, the fragmentation of Offred's thoughts and the theme of anachronism within her character becomes more limited, as she drifts less and less into previous time periods. ...read more.

In the reference where Offred 'sinks into [her] body...a treacherous ground,[her] own territory' there are strong links between the female body and natural landscapes, implying a detachment from the more corrupt patriarchal societies, such as Gilead. There is also strong imagery relating to the menstrual cycle through quotations such as, 'I watch for blood, fearfully, for when it comes it means failure', further clarifying the feminine nature of the section. Atwood uses this language to present the intensified isolation of females from males - both in body and in mind - on which the Gileadean society thrives. This isolation can also be discerned in the fact that there are relatively few feminist-loaded sections, in the backdrop of male dominance and intimidation. On a final note, the placement of the Historical Notes after the novel also holds great significance in relation to the structure. The Historical Notes provide a change in the one-dimensional perspective seen throughout the rest of the novel, therefore giving the reader an additional viewpoint to consider. ...read more.