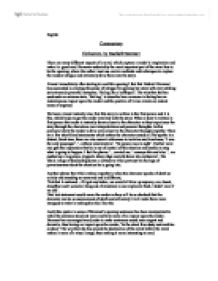 English Commentary Corkscrew, by Dashiell Hammett There are many different aspects of a novel, which capture a reader's imagination and make it a good read. However undeniably the most important part of the novel has to be the opening, where the author must use certain methods and techniques to capture the readers intrigue and ultimately draw them into the story. Almost immediately after starting to read this opening I feel that Dashiell Hammet has succeeded in creating this sense of intrigue by opening her story with very striking yet extremely powerful metaphor, 'Boling like a coffeepot'. The way that she has used such an extreme state, 'Boiling', to describe how someone is feeling has an instantaneous impact upon the reader and the position of it also creates an instant sense of urgency. We know almost instantly also, that this story is written in the first person and it is this, which helps to get the reader involved with the story. When a story is written in first person the reader is instantly drawn closer to the character as they experience the story through the characters own interpretations and personal thoughts. In this particular story the reader is draw even closer to the character through empathy. ...read more.

one level where it has been used to capture the readers attention and illustrate mental images of the surrounding setting, but also on a deeper note where it almost represents more about the nature of the people it beholds. There are several metaphors that directly link characters feelings to the setting, the main one being the heat. 'The higher it got, the larger and hotter it got'. The sun could be seen a metaphor for his destination, and the heat could be portraying his feelings of increasing angst and discomfort as he is nearing the destination. A second representation of how the setting reflects its people is the use of the dust. In the desert dust is something you would come to expect to be everywhere but some of the references in this story lead me to believe that the dust is just a metaphor for the corruption of the town. When the sheriff reaches the town he asks a fairly in hospitable man for ' a room and a lot of water' however the mans reply is 'but water wont do you no good. You won' no sooner drink and wash than you'll be thirsty and dirty all over again.' ...read more.

Throughout the beginning of this novel the atmosphere and mood changes several time as the situations unravel themselves. At the beginning the negative description of the harsh unsown desert land creates an uncomfortable, unfamiliar mood. Hammet has used foreign words in this part to reinforce the feeling of unfamiliarity and the feelings the idea of descending down into corkscrew evokes are of helplessness. However as the story progresses and when the sheriff reaches corkscrew and the rest of the characters are introduced, there is a confrontation between the sheriff and a local and the atmosphere becomes increasingly tense, 'I hid my annoyance under my grin'. It is now for the first time that the reader becomes aware of who and what the character the readers have been following is doing and the sceptical mood of before has now been replaced with intrigue and a sense of 'what's going to happen next!'. The final change in atmosphere is in the final paragraph when we see the sheriff's hesitant mood turn swiftly to determination, as he stows away his ' new .32 automatic' and prepares to show his authority. Here the reader almost mentally prepares, as the sheriff is doing, for what will happen next. These are many of the aspects of the opening that makes it a successful introduction to the novel, in terms of creating intrigue and drawing the reader into the novel. ...read more.